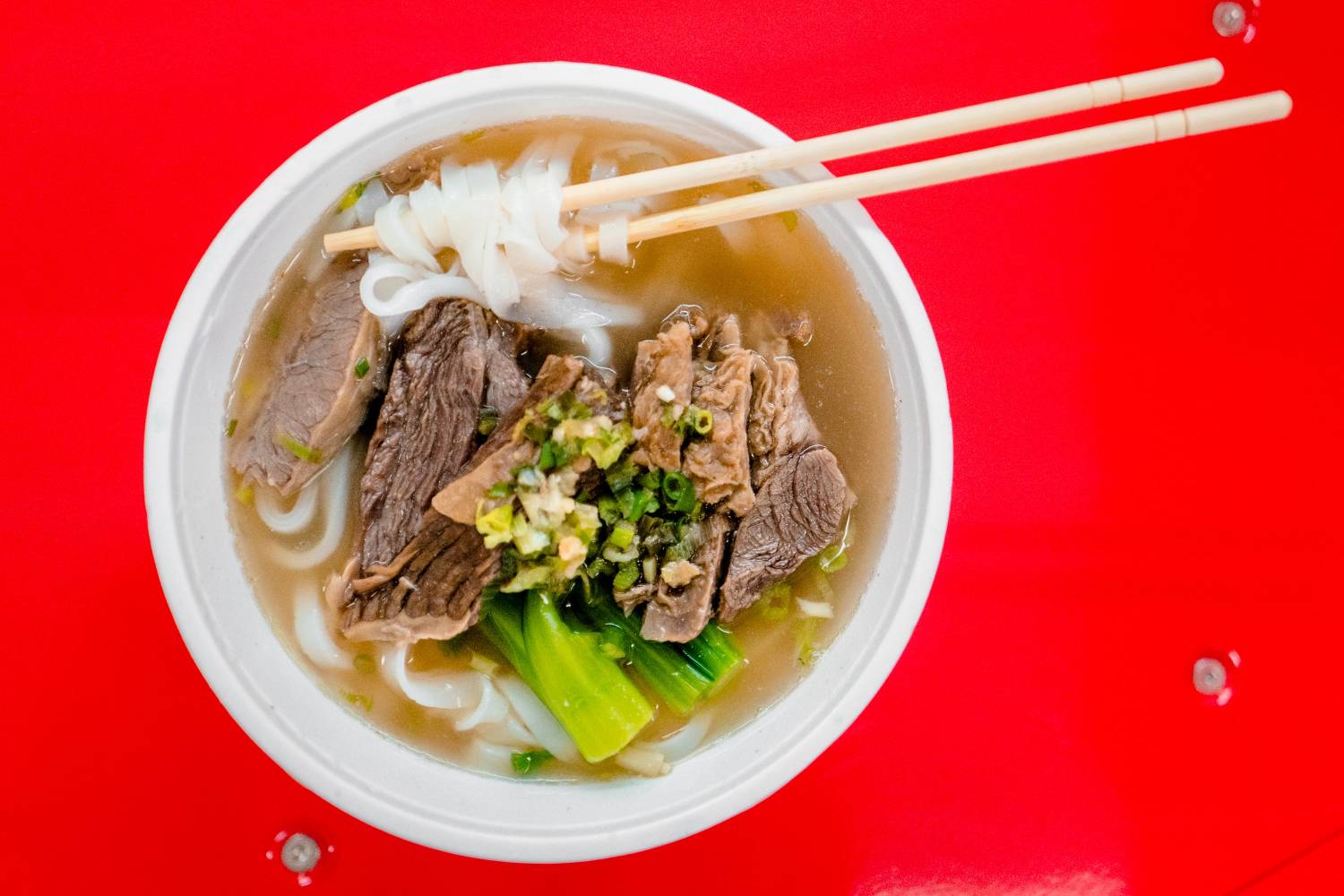 Asian cuisine is a diverse and delicious category of food. We’ve decided to split up our list into four categories of Asian cuisine: Chinese, Japanese, Vietnamese, and Korean. Some of these restaurants are traditional, some are heavily Americanized, and some are fusions of two or more different styles of Asian Cookery. To start off though we’ll go through the best Chinese food in Gahanna, Ohio.

Joy Food One is a homestyle, Americanized Chinese restaurant that will absolutely satisfy your hankering for Chinese food. The food here is filling yet light and the ingredients are always fresh and made to serve.

If you’re craving a classic American-Chinese meal, then this is definitely a spot to try. Even if you’re vegetarian, there is plenty here to choose from that doesn’t have any meat in it.

Joy Food One also boasts an incredibly large menu so we’re sure that you’ll find whatever it is you’re looking for.

If you need a recommendation for what to get when visiting Joy Food One, Matthew S. from Yelp, “Had the Hunnanan combo and my buddy had fried shrimp. The protein meats, chicken, beef, shrimp were amazing. The breading on the shrimp was perfect. And I really mean that. It was very lightly breaded yet crisp. Initially I thought the prices were a bit high, but not after eating.”

Jade Bowl House Mr. Wok is a bit more of a traditional Chinese spot (minus the BBQ spare ribs which are surprisingly delicious). If what you’re hungry for is an Americanized Chinese meal though, this place still has you covered,

Just like Joy Food One though, the menu is huge and is sure to please everyone in your party.

Alright, we won’t sugarcoat this one -- it’s Panda Express. We’ve all had it, and although we may not like to admit it, it’s pretty freakin’ good. All we really have to say is, “General Tso’s Chicken,” and we could probably move on from this one, but we’ll continue in case one of our readers hasn’t had Panda Express before.

If you haven’t tried it, go for it already. It’s a quick and easy, Chinese fast-food meal that’ll at least leave you completely full, and at most make you crave more.

Chinese Express is similar to the other Chinese restaurants that we’ve mentioned so far, except it does have one thing that sets it apart.

Chinese Express offers a special health food section on their menu. The menu is a short list of some delicious items that are steamed instead of cooked in oil, and the sauce always comes on the side. If you’re worried about your Chinese meal being too unhealthy, Chinese Express has the solution to that problem.

Beyond that health food section, the food selection is pretty normal for a Chinese restaurant like this one.

Steve B.’s Yelp review tells you all you need to know before you give Chinese Express a visit: “We recently moved to the area and were looking for a good Chinese place. We tried China Express for dinner tonight and weren't disappointed. Their egg rolls were good sized and not overcooked. Portion sizes were larger than we expected. The chicken fried rice got 'thumbs up' from the wife and kid. I found the szechuan chicken to have good flavor but beware there was a lot more chilis than found at other places. The dining room was quiet and clean. We'll be back!”

Ajumama is a food truck that serves up fresh Korean street food. Ajumama is a real gem in the Columbus area as it brings the authentic flavors of Seoul to faraway audiences, and that audience couldn’t be happier that they’ve decided to share their cuisine.

Ajumama has sort of been the talk of the town as it prides itself on being based in traditional Korean cooking, but never being afraid to venture into a modern take on that food. One of the best examples of this on their menu is the kimchi bratwurst.

The kimchi bratwurst is exactly what it’s title describes, plus some spicy kewpie mayo to top it off. By no means is a bratwurst a Korean dish, but the flavors of a bratwurst combined with that of the kimchi and the mayo make for a Korean cuisine experience that is truly unique and more importantly, delicious.

If you’re a vegetarian then we can’t recommend this place enough. The spicy Korean BBQ is something once you try, you won’t be able to stop thinking about. If that doesn’t excite you though, Ajumama’s veggie potstickers definitely should.

No matter which menu item you’re excited about trying, it may be worth your time to give them a call before you actually go get the food to make sure that whatever you want is available that day because their menu can fluctuate a bit based on the availability of some ingredients.

Kevin C. on Yelp writes that Ajumami, “has the most delicious Bulgogi Cheezesteak (Marinated shaved beef topped with sautéed onions, shishito peppers, and kimcheeze sauce on a warm hoagie roll. Dress classy, eat kimcheezy.)  Amazing!  When family was in town we looked this place up on the food truck finder app and drove all the way downtown to go get food here. Love the food here.”

We think that it’s fair to say that what Chipotle is to Mexican cuisine, Bibioap is to Korean cuisine. Bibibop is a sort of Korean, heavily customizable restaurant where whatever combination of ingredients you want, you can have.

The basic construction of a Bibibop bowl is a whole host of fresh veggies like carrots, corn, red cabbage, etc. mixed with a protein and sauce of your choice.

If you’re super health conscious or a picky eater, Bibibop is a great place to get some basic Korean flavors in a customizable and healthy package.

Sushi is the most recognizably Japanese dish that you can find, and as far as we can tell, Mr. Sushi can make that dish perfectly. Mr. Sushi has every kind of roll or nigri that you could ask for -- from a classic yellowtail roll to the intriguing cajun volcano roll.

Mr. Sushi has a decent selection of vegetable rolls that we’re sure will satisfy your veggie sushi cravings. By the way, we know it sounds crazy but the Idaho roll is actually amazing. You may not think that a deep fried sweet potato is a part of Japanese cuisine, but a veggie tempura can include yams so this dish isn’t actually as crazy as it seems.

If you don’t believe us, then take a look at their Yelp reviews where they have accrued a whopping 83 five-star reviews.

The food here is simple, but because of how expertly it’s made, the flavor of each ingredient in every dish is turned up to ten. The menu at Tora is just big enough to have enough there for any picky eaters, but it isn’t overwhelming in any way.

The menu is mainly filled with Japanese staples like sushi and ramen, but it also has some fusion dishes like hamachi carpaccio which is a Japanized carpaccio with Yellowtail.

Tora isn’t just about the food, though it is amazing, it’s also about the ambiance. It’s a nice but not overly fancy environment that’s perfect for a lunch date or a bit of an upscale dinner.

One of the classic Japanese dishes, udon noodles, often in soup, is has gotten rave reviews. Alexa N. on Yelp writes this about Tora’s udon: “Holy cow!! It was the best bowl of udon I have had in Columbus. There was something extra they added to their broth that gave it a sweet flavor profile on top of the savory, maybe a soy sauce or maybe it was because of the mushroom's flavor being boiled into it? It was just purely amazing. The noodles were still chewy which I love and the mushrooms. It comes in a big bowl and with varieties of mushrooms. You can tell the mushroom is cooked in the broth because when you bite into the mushroom there's so much flavor, plus it adds juiciness to the mushroom!!”

In addition to everything on the menu, Indochine Cafe also offers vegetarian options for most items on their menu, so the vegetarian in your life never has to feel left out!

We think that Indochine is an exceptional, authentic Vietnamese restaurant, but if you don't believe us, then believe the 279 five-star reviews that they have on Yelp.

Matthew F. raves about Indochine Cafe saying that “Generations of my family & I have loved this place since they opened! Whenever fam is in town, this is our #1 thought on our short list of where to go! Always AMAZING GENUINE food! Even during Covid-19, amazing food at drive thru about once a week on the regular. Kid friendly & great location!”

In this list, we’ve given you a wide variety of different asian restaurants that we know are delicious. If you’re looking for an authentic Asian meal, we’d suggest Indochine Cafe, Tora, or Ajumama the most, but if all you’re worried about is taste, then any of these spots will do you well.

Image courtesy of Alice on Unsplash.

The Best Local Gyms To Better Yourself In Gahanna, OH

Moving to Gahanna, OH? Here’s Everything You Need to Know

What Do you Know About the Herb Capital of Ohio?

Pig Out In Gahanna, Ohio With These Delicious Mexican Restaurants

By
Diana Velasquez
Around Ohio
//
Gahanna

7 Pizza Restaurants That Are Bound To Be Your New Go-To Spots In Gahanna, Ohio

Bars in Gahanna, Ohio To Put In Your Happy Hour Rotation

Get a Taste of the Warm Weather This Spring With the Most Beautiful Parks in Gahanna, Ohio

Pig Out In Gahanna, Ohio With These Delicious Mexican Restaurants