Dayton is an Ohio city that packs a lot of fun within its borders. 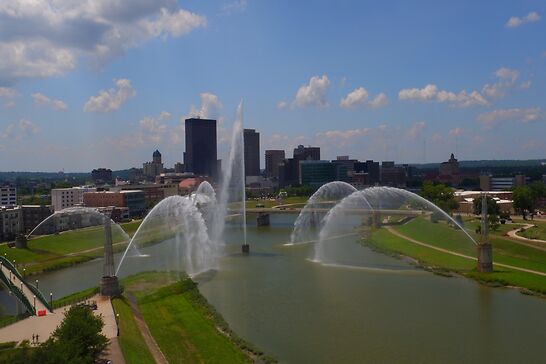 Dayton is the sixth largest city in Ohio. The city has a population of over 100,000 people, and the greater Dayton area has around 800,000 residents. It is a center for shipping, manufacturing, and suppliers due to its infrastructure. This town is proud of its history and does its best to preserve it. It continues to be a center for technological innovation just as it was in the past. The city conducts significant research in many fields such as industrial, aerospace, and healthcare. You won’t be left without fun things to do either. This city is filled with tons of restaurants, acres of park land, and several amazing museums. Check out some of the reasons why Dayton is such a great place to live!

Dayton has the lowest housing costs out of the four largest metro areas in Ohio. Homes in the city normally cost around $160,000. It is more affordable than many U.S. cities, not just in Ohio. City living without breaking the bank makes for a great experience.

Dayton is a mid-sized city with all the benefits of an urban area that isn’t overwhelmingly large. There are about 140,000 residents that live in the city. It’s not overcrowded, but still filled with plenty to do. There are several great attractions for residents and visitors alike, and annual festivals people come from all over to attend.

Traffic in Dayton is not very bad at all. During rush hour, average commute times are only 10-24 minutes! That is much less than the amount of traffic you have to slog through in more densely populated cities.

Baseball is one of the most popular sports in the city. Tickets to the Day Air Ballpark to watch the Dayton Dragons play are consistently sold out. Residents also enjoy seeing the Dayton Dutch Lions, the city’s soccer teams. Dayton even has a professional roller derby team. You can hit up a number of sports bars to watch the games or for pre game drinks. Any sports lover would have a great time living in this city!

Aside from professional sports teams, Dayton has a lot to offer to amatuer sports players. One venue that gives them space to grow is the Action Sports Center. It has several baseball fields and supports different teams of all ages. They have sponsored leagues, clinics, and offer training. This place is churning out many young and talented athletes!

Dayton is a city of many restaurants. There are so many options, there are several ranking lists available online to help you choose. There are restaurants from many different cultures. You can get German, Polish, Latin American, Italian, and Middle Eastern Cuisine among others. You’ll find high end restaurants, casual restaurants, and fast food.

Many cities have foods that are uniquely popular in their region. Dayton is known for its square cut pizza. Square cut pizza was introduced to Dayton in 1964 and immediately became a culinary phenomenon. Even though most cities primarily serve the traditional triangle cut pizza, Dayton has stuck to their square cut pizza, making it a recognizable staple.

Dayton is home to several local food events and festivals. Some of those events include the Dayton Vegan Food and Drink Festival, the Anatolian Festival, German fest Picnic, and the Dayton Greek Festival. These food events celebrate many different cultures and give residents chances to try foods they might not normally eat.

The National Museum of the U.S. Air Force is one of the oldest military aviation museums in the world. The museum features a selection of permanent displays and a selection of rotating displays. Visitors even get the chance to walk through the aircrafts that several U.S. presidents have used. Those presidents include Roosevelt, Kennedy, Ford, and Clinton.

If you’re a lover of cars or of history, America’s Packard Museum is a great place to visit. The location is a restored 1920s dealership. The restored Art-Deco style showroom gives visitors a glimpse of what it looked like back in its functioning days. It is one of the top museums dedicated to vehicles in the country.

The Woodland Cemetery is one of the five oldest rural garden cemeteries in the U.S. The arboretum holds over 3,000 trees and 165 species of plant. The park’s lookout is the best place in the city to see elevated views of the Dayton skyline and its hillsides. Visitors get to simply relax outdoors and enjoy the great views.

12. Balcony at the Art Institute

The balcony of the Dayton Art Institute’s balcony has one of the best views in the city. You get to enjoy the art centered space and enjoy amazing views. This also happens to be one of the best places to watch the fireworks on the fourth of July!

The Dayton Club is a private club that sits atop Dayton’s tallest building, Kettering Tower. This is a place where people go to socialize, network, and even exercise. It offers many useful amenities. The great view is just an extra benefit to spending time on this building's top floor.

Dayton is home to several breweries. The most popular one is the Dayton Beer Company. It became Dayton’s first local brewery back in 2012. They don’t believe in shortcuts for making beer, which you will notice when you taste it. Their goal is to make sure that their customers can enjoy the freshest and tastiest handcrafted beers.

This city takes time to celebrate all its breweries. One of the most popular beer celebrations in the city is BEER! A Celebration of Dayton Brewing. It has been a celebration for over 6 years. 17 participating Dayton area breweries will join together to share their beer. They will each feature a signature beer that everyone can try. They also host several gourmet food truck stands that serve the attendees along with live performances!

There are parks scattered all throughout Dayton. The Riverscape Metro Park is a haven for fitness and recreation. This park sits on the bank of the Great Miami River and gives the residents there a chance to connect with nature. There are five fountains that are on during certain hours of the day, an ice rink, and bike rentals. Visitors of this park often participate in bird watching, paddle boarding, and fishing.

Island Metro Park is just a few miles north of Riverscape Metro Park. It offers river access for people who want to row and fish, paved bike trails, picnic trails, and an iconic pedestrian bridge. They even have a playground with an interactive water play system. It is open all year round along with the rest of the park’s features.

Sunrise Metro Park sits on a high bank above the Miami River. It offers great views of Dayton’s skyline that changes with the time of day. This park’s trails are great for walking, running, and bike riding. It borders “Friendship Park,” another Dayton park worth visiting.

Dayton is home to many high quality companies. The city has a business model that is mostly focused on five industries. Those industries are aerospace R&D, Human Sciences and Healthcare, Information Technology, Water, and Advanced Materials and Manufacturing. The community provides fertile ground for entrepreneurs, investors, and employees.

The City of Dayton Division of Development is dedicated to helping Ohio resident’s businesses thrive. No matter what the industry, they will be there to support new entrepreneurs who request their help. They provide access to capital, assistance with permits, referrals to business resources.

Dayton was voted the number two cheapest place to live. The median home value is just $69,600. This city’s low cost will help new entrepreneurs get their businesses running.

The University of Dayton is a private Catholic research university. It is the second largest private university in Ohio and one of three Marianist universities in the country. This school focuses on providing their students with the skills they need to learn and thrive. They also offer students plenty of chances to gain practical knowledge in their chosen field.

Dayton Public Schools includes over 28 schools. The district has over 12,000 students enrolled in pre kindergarten up until the twelfth grade. All Dayton Public Schools have been voted 5 stars by the Ohio Department of Education. In Dayton, kids can get world class education for free.

The Dayton Ballet was founded in 1937. It is the second oldest regional company in the U.S. They put on performances of popular stories. This year’s performances will be based on Swan Lake and The Great Gatsby. If you love ballet, you’ll be happy to catch either of these shows!

The Dayton Opera has been part of the city since 1960. They produce three operas along with one operatic concert per year. Tickets for individual performances are available starting August of each year. You can even purchase a subscription so that you can see several shows instead of just one!

The Dayton Philharmonic Orchestra puts on several performances throughout the year. They play all types of genres, so there is something there for everyone. They put on shows called the “Masterwork Series” that is a celebration of classic composers. They also put on the “SuperPops Series” and the “Rockin Orchestra Series.” Those shows feature music from Prince, Elton John, and much more! You can even catch family and holiday concerts at this orchestra.

Dayton is the place where funk music was founded. In the 70s and 80s, Dayton’s west side became known for the many funk bands forming in the area. The funk music from Dayton is something that inspired modern music styles that are popular today. The Funk Music Hall of Fame was created to celebrate the impact and legacy of funk music to the community.

The Boonshoft Museum of Discovery is a children's museum that focuses on science and natural history. The museum features an extensive collection of natural history along with a collection of live animals, only some of which are native to Ohio. Kids get a chance to have a good time while they learn at this museum.

The Dayton Art Institute started out as the Dayton Museum of Art. It was founded back in 1919. The building itself was designed by a renowned museum architect at the time. The museum’s encyclopedic collection is recognized as one of the finest collections in the Midwest, both nationally and internationally.

Dayton is a city that you are sure to have a good time in. There are restaurants, museums, parks, and many more places to visit indoors and outdoors. There is something in Dayton for everyone, so don’t miss out on this amazing city!