Established in the 1800’s, this city has a bright future 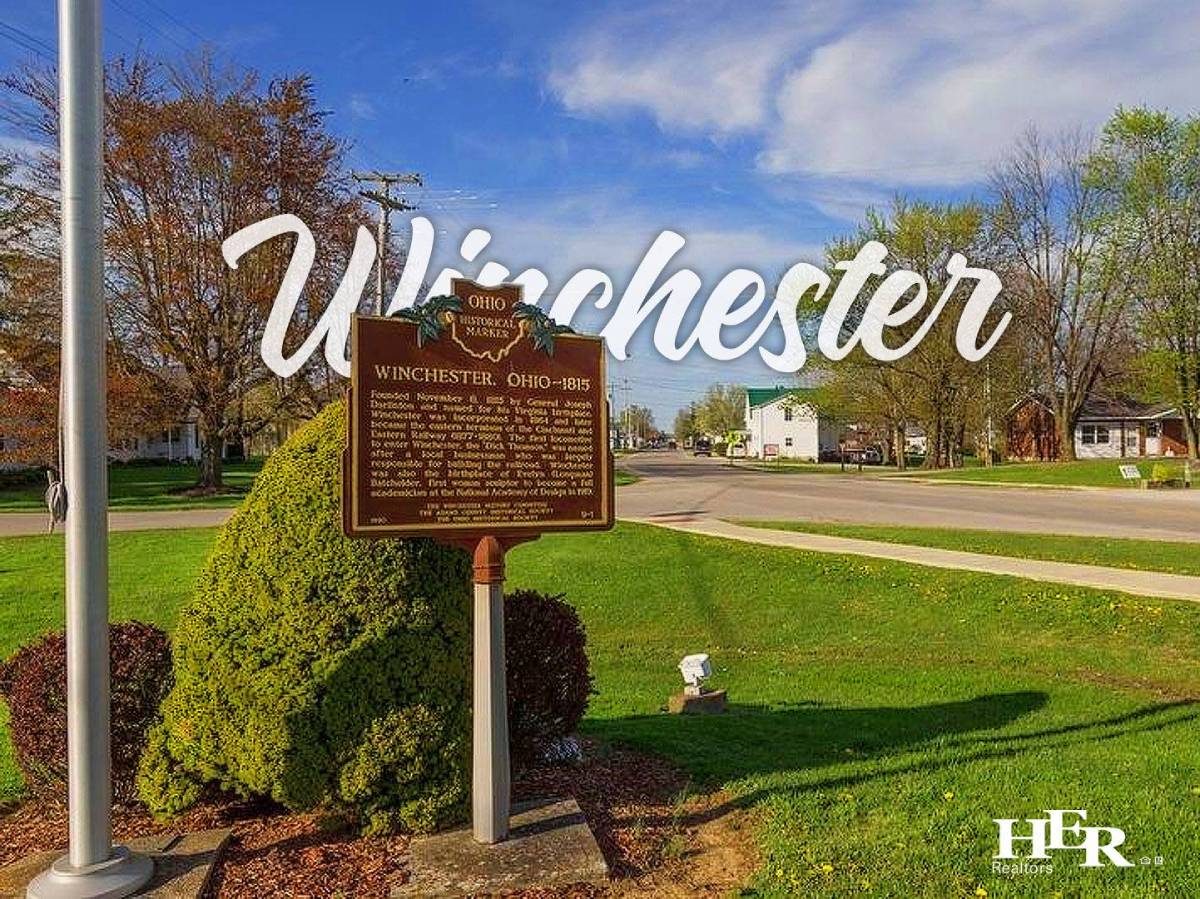 The quaint small town of Canal Winchester was born in 1828, when canal workers began digging on Reuban Dove’s land.  He was angry, and wanted to sue the state-- but the workers convinced him and John Coleman that they’d be better off creating a town instead.  After all, the land was halfway between two well-established Columbus and Lancaster county seats.  The village was named after Dove’s father’s beloved hometown of Winchester, VA.

The town prospered due to agriculture and transportation-- after all, the canal part of the name was no joke-- and post office was erected in 1841.  There’s an unofficial legend that two boys played a Halloween prank by hooking up their horses to nearby Waterloo’s post office, and dragging it over to Canal Winchester, who didn’t give it back!  The railroad was added in 1869, and the town continued to prosper.

The town is small-- just over 7 square miles-- but it boasts just under 8,000 people.  If you’re thinking of adding your household to the population of Canal, Winchester, we’ve got everything you need to know about living there listed right here.

What kind of services does city government offer?

The city of Canal Winchester is governed by a city council and a mayor in a form known as Strong Mayor-Council.  You can read the charter on the city’s website.  It grants all legislative power (excepting those reserved by the people) to the City Council, the members of whom are elected every four staggered years.  Meetings are held the first and third Monday of each month, with the records made public on the city’s website.  All of the Council’s meetings are open to the public, and each person addressing their concerns to the Council have a 5-minute limit.  Council members are not required to respond to public comments.

Prior to each meeting, the City Council has a work session.  The work sessions are divided into two sections: Finance/Economic Development and Service/Safety items.  These work sessions are also open to the public.  Overall, we find that the City of Canal Winchester appears to want full transparency for their residents, at least insofar as government procedures are concerned.

New residents to Canal Winchester, Ohio will appreciate the directory that the city has put together on their website.  It’s especially designed for new residents, and contains listings for utilities, city and emergency services, schools, community organizations, and libraries.

‍Canal Winchester contracts with the Fairfield County Sheriff to provide police services to the community.  The local sergeant and deputies office is located on N. High Street.  They have jurisdiction over Canal Winchester city limits and are charged with enforcing the city ordinances 24/7.  Vacation house checks are available by request.

The Fairfield County Sheriff also oversees the Community Watch Program, which is a neighborhood volunteer program to deter and report suspicious and criminal activities in designated areas.

The City Canal Winchester website has loads of other useful information.  There you can find the information above, as well as information on Water & Sewage, Licenses & Permits, Community Partners, and more.  Make sure that you visit the Tax Information page to read all about the 2% city income tax, property taxes, and school district taxes.

What is the housing like?  How do the schools perform?

The prices of places for sale and rent in Canal Winchester, OH is just about at the national average, according to Niche.com.  As a suburb of Columbus, the prices are a bit on the pricey side, but nearly everyone in Canal Winchester owns their homes-- approximately 81% of the population are homeowners, while 19% rent.  The average home cost is $176, 800 and the average rent is $921/month.

It is worth noting that ethnic and social diversity is a bit less than expected, given its proximity to a major city.  88% of the population is white, while only 5% identify as African American, 2% Asian, 1% Hispanic, and even less in other ethnic identities.  The ratio of those who identify as male and female is approximately even-- only varying by a few percentiles-- and around 28% of the population has some sort of college degree.  16% have a Master’s.  Residents tend to be young to middle-aged, with the 4th largest age group being over 55 years old.  The average household income is $83,304 which is almost $30 grand higher than the national average.

Canal Winchester, OH is also home to five excellent schools from preschool to high school.  There are other public and private schools in the surrounding area, but only five are considered to be in the city.  If you’re moving to the area and wish to enroll your child in one of the schools, you’ll need to visit the Enrollment/Family Information page on the Canal Winchester school page.  Schools have slight variations of a 20:1 student-to-teacher ratio, and students perform over the national average with scores.  The school district utilizes PowerSchool to post grades, assignments, and other important information.  Students, teachers, and parents all have access to the PowerSchool network set up by the district.

There is no public transportation system such as a local bus company in Canal Winchester.  There is a Central Ohio Transportation Authority Park ‘n Ride at 6600 Trillium Avenue.  Lines 25 and 52 will take passengers to and from downtown Columbus, Ohio, of which Canal Winchester is a suburb.

What makes Canal Winchester so great for business?  Location, for one thing!  It’s ideally located within 20 minutes of Port Columbus International Airport and 10 minutes of Rickenbacker International Airport.  60% of the United States population and 40% of the Canadian population are within a day’s drive, and high-speed interstates are also minutes away.  All this adds up to a location that’s great for transportation while still being far enough away from major cities to not compete with a growing labor force.  As the city of Canal Winchester grows, so does its need for business!

As a growing city, Canal Winchester wants more companies to settle in and grow.  The city’s website has a list of resources available, and the city is happy to provide businesses with a lot of assistance and support, such as small business support, property tax exemptions, grants, and a host of other incentives.

Where to eat and what to do

Canal Winchester is a bit on the quiet side, but the food and entertainment that are available are quality.  As a smaller institution, there’s a little more care and attention to detail.  Sundays are especially quiet, but that just makes it the perfect day to spend off the phones and in the parks!

The food scene has really taken off here, thanks in large part to the investment into breweries.  Brewdog Brewery is a popular spot for lunch, dinner, and craft beer.  Their food menu includes vegan and gluten-free options, burgers, mac ‘n cheese, salads, and small plates.  They offer tours of the brewery, and dogs are allowed on the patio.  The brewery is attached to the Brewdog Hotel, where everything is beer-themed-- there’s even a stocked beer fridge beside the shower!

The Shade on the Canal restaurant is open for lunch through late-night cravings.  They serve American-style comfort food with some Tex Mex thrown in, with a selection of micro and local brews on tap.  “The Shade” is known for their wings, so be sure to give those a try!  There are vegetarian-friendly options, too.  The service is known for being friendly and efficient.

For something more unusual, try Harvest Moon Craft Kitchen, which doubles as a health-food store.  Often called a “hidden gem,” Harvest Moon serves breakfast, lunch, and dinner.  Vegetarian, Vegan, and Gluten-Free options on the menu receive great reviews, and the alcoholic drink menu is extensive.  Bonus: add a CBD shot to any cocktail for $2!  And they have a kid-friendly menu as well.

Be sure to also check out the Hidden Lakes Winery and the gluten-free bakery Fantasy Cupcake for after-dinner drinks or dessert-- or just a quick anytime treat.

‍Slate Run Living Historical Farm, located on State Route 674, brings the pastoral past to vibrant life.  There are picnic grounds nearby, and you can tour the barn and surrounding buildings, too.  Everything is from the 1800’s, and the folks who work on the farm also wear the historically accurate costumes.  If you like, you can help out!  Slate Run is a real farm-- the folks who work there, live there-- and eat and drink whatever they create on the land.  There are no vending machines, but there’s also no admission charge, either.

On Wright Road, you’ll find Pickerington Ponds, which is a bird-watchers paradise.  There are several walking trails, although you’ll find that many of them discourage dogs due to their noise and hunting instincts.  A peaceful place to soak up nature and get away from the buzz of everyday life.

Canal Winchester is also home to a rather unique museum.  They’re home to the National Barber Museum, where tour guides describe anecdotes and history with ease.  The museum is full of unique treasures and a strong sense of nostalgia and pride.  After all, barbers were also light medical practitioners a long time ago!

The Municipal Pool is absolutely wonderful in the summer!  Located on Groveport Road, it has a wading pool, waterfall feature, and even a climbing wall!  They also have a competition pool with diving boards and a concession stand with the typical park fare.  Their Thunder & Lightning Policy is standard for most parks, and the Canal Winchester Dolphins of the Tri-County Aquatic League make it their home pool for practices and competitions.  The pool offers different types of passes, ranging from seasonal to weekender and vacationer.  Seniors, Disabled American Veterans and Active Duty Military are free.   Seasonal swimming lessons are also available.

Right next to the middle school is Walnut Creek Park.  This park boasts soccer fields, hiking trails, and the aforementioned creek.  A great place to run around and work off some post-school or holiday energy!

Let’s not forget the local branch of the Columbus Metropolitan Library!  Libraries are wonderful resources in every town-- they offer the traditional books and movies, but also so many wonderful after-school, community and summertime programs!  The local branch’s manager-- Matt-- personally invites everyone to pop into the library and chat him up about the library’s offerings.

Canal Winchester, Ohio is a quiet gem of a city-- slow Sundays, bustling workweeks, and Saturdays made for settling into home improvement projects or outdoor activities.  And with Columbus so close by, you’ve still got access to cultural events and world-class cuisine, not to mention state-of-the-art medical care.

We know we’ve missed some of the things that make Canal Winchester, Ohio the best place to live, so if you have lived in Canal Winchester (or live there now), please drop some suggestions for future articles in the comments below!  And if you’re moving there soon, drop us some questions, too!

25 Things to Do in Canal Winchester, OH

25 Things to Do in Canal Winchester, OH