Moving to Medina, Ohio? Here’s Everything You Need to Know 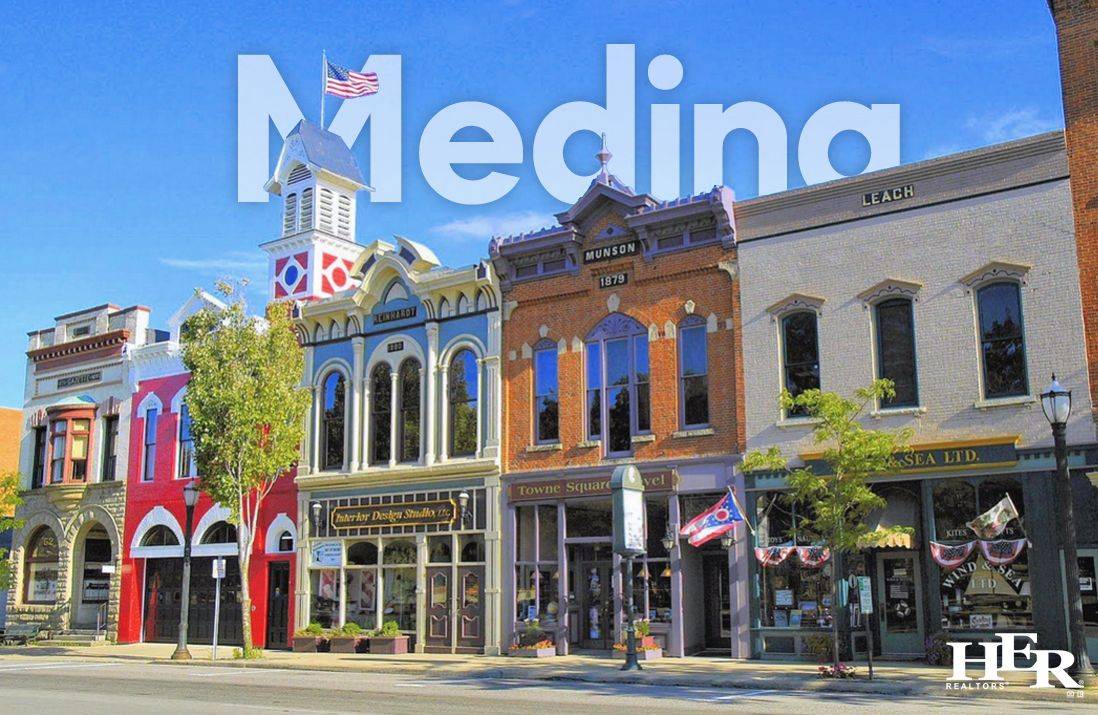 Medina, Ohio’s history one of farming and fire. Founded on November 30, 1818, it was originally named Mecca. The name was already claimed, so the farmers who lived there changed it to Medina. Eventually, in the 1830s, the building of the Erie and Ohio Canals brought more business and settlers to the area. In 1835 Medina was officially incorporated as a village and the county seat of Medina County. Stone quarries nearby drew success to the small village, and twenty years later they were making $200,000 per year.

The area remained on the small side for a long time. The 1840’s saw just under 700 inhabitants in the area served by 6 churches, 15 stores, a newspaper, two factories, a mill, and one iron furnace. Disaster struck in 1848 in the form of a fire-- the entire business district was reduced to ash, because the town didn’t have any fire-fighting equipment and the bucket brigade was no match for the flames.

In 1857 there was a canal worker strike-- all were fired and two spent time in the nearby Albion jail.

1869 was a new era for Medina. Amos Root founded A. I. Root Company, and Medina became a center of manufacturing for beehives and beekeeping equipment. By 1886 it was the town’s major employer. Business boomed for Medina, and people answered the call-- by 1890 there were just over 2,000 residents.

Another fiery disaster struck in 1870, burning through 45 buildings-- in total, all but two blocks of the business district. Once again, the fact that the town had not budgeted for fire-fighting equipment allowed the fire to spread quickly from wooden frame to wooden frame. But this was not the end of Medina!

Medina embodied the phoenix, and rebuilt under the eye of banker and former mayor Harrison Gray Blake. The City Council finally purchased a fire engine in 1877, and Blake oversaw the construction of the Engine House and Town Hall. It took almost ten years to rebuild the downtown area, so the unity of architecture in the Victorian style was accomplished with care. Blake’s Phoenix Building, Engine House, and Town Hall have a rather unique flair that represents the resilience of the Medina residents.

The Town Square’s architectural unity helps make it a recognized Historic District, and the Historic Preservation Board and Community Design Committee both work to preserve the look and feel of Medina’s downtown.

Medina has grown a lot since the 1800’s, and in 1952 was chartered as a city. It’s proximity to Cleveland have made it a popular suburb, and its popularity isn’t ending anytime soon!

Like most towns and cities, Medina, Ohio runs on a Council/Mayor form of local government. The Mayor, City Council members, and City Finance Director are all elected by the local public. In keeping with tradition, four members of the city council are elected by their wards and two at-large.

Business built Medina, and Medina hasn’t forgotten. The City posts local commercial real estate on a specially designated webpage on the MedinaOh.org website. Why choose Medina for your new business venture? A well-educated workforce, excellent location near transportation venues without the costs of Cleveland, and lower taxes are all great incentives. Not to mention very active organizations dedicated to growing businesses-- Greater Medina Chamber of Commerce and Main Street Medina-- and a shortened permit period specifically instituted to get businesses out of the planning into the construction phase quickly. Check out the City’s list of Economic Development Partners and the government-specified Opportunity Zone while you’re at it-- Medina just may be the next big thing for you and your business.

Medina Police are dedicated to a “proactive problem-solving approach” and host a variety of useful links on their webpage. Helpful and community-oriented, they offer online accident reports and ticket payment, vacation watches for your home while you’re away, and more. The Medina Fire Department was started in 1874-- after that terrible second fire destroyed most of the business district. The department purchased its first truck three years later. Nowadays, there are four stations with six pieces of emergency equipment (trucks included), operated by 9 officers and 30 firefighters. But as the webpage states, the “... [title of fire department] does not define [their] capabilities.” Medina’s Fire Department also handles hazardous material, technical rescue, and more.

When moving to Medina, be sure to stop at the City Water Department to fill out an application card. You may also need to pay a deposit. Local Water Quality Reports are published annually. The Sanitation Department charges a monthly fee for weekly trash and yard waste pickup. They also are authorized to provide industrial waste disposal for businesses. The Street Department is responsible for a multitude of issues, from street cleaning and repair to detention ponds to leaf pick up and traffic signal repair.

The City of Medina also has a section of their website for residents, filled with links and useful information-- including the latest issue of the Medina Area Magazine & Community Guide. You can also find information on taxes, maps of the area, and public transportation.

Living in Medina, Ohio is a good life-- most folks earn enough money to secure their own homes, the communities are safe, and the schools are highly rated.

According to Niche-- a Pittsburgh-based company that analyzes data and reviews to provide an overview of a community-- Medina residents generally are well-educated, conservative homeowners. As of January 2018, the population was around 26,348 people who were generally white-- 4% were African American, 2% Hispanic, 1% Asian, and 2% of mixed race. 31% of the population have a college of some sort, 25 % have a bachelor’s, and 10% have a Masters or higher. Those who identify as male and female are equally represented. 26% of the population is under the age of 17, and 26% are between the ages of 25-44. What this means is that Medina has a lot of families with children who are in school or about to head off to college. 25% of the population is over the age of 55, with the majority of that age group being over 65. What this tells us is that people don’t just move here to raise a family and work, they also stay here to retire-- which indicates a strong community connection.

Most of Medina’s residents commute to work in Cleveland or the surrounding area. The average commute is around 27 minutes, which is slightly longer than the national average. A little over 87% of residents drive their own cars to work while a little under 8% carpool.

Medina’s cost of living is about 3.5% lower than the national average, with price points on most of the necessities-- housing, food, and utilities-- very close to the national average. Health was actually a bit lower! The median home value is over $165 thousand, and the average rent is $819. 65% of residents are homeowners. Home appreciation is currently-- as of January 2020-- 6.5%.

Surveys by Niche indicate that there is a good sense of community and that the LGTBQ+ community is “somewhat accepted.” Most the Ohio suburbs listed on Niche do not have any reflection on this last point, so it definitely points to a friendlier community overall.

Medina’s crime rate is 3.1 times less than the national average. The vast majority of crime reported was theft or burglary-- though assault and rape were reported as well, the statistics are much lower than non-violent crimes. As of January 2020, 67 sex offenders live in Medina-- though it is important to note that sex offenders can be non-violent.

Medina is a very safe community! Polls collected by Niche paint a vivid picture: all of the respondents indicated that they felt either safe or very safe, and 65% felt that the police presence was visible and very responsive.

The schools in Medina, Ohio are highly rated. There are several in the area. The two top-rated elementary schools are Heritage Elementary School and Ella Canavan Elementary School. Heritage Elementary has over 300 students in grades K-5, with a ratio of 18:1 students to teachers. State test scores indicate 87% of the students are math proficient and 82% are reading proficient. The student population is not very diverse. Ella Canavan is a little better in terms of diversity, and has a student-to-teacher ratio of 19:1 with around 380 students overall in the same grades as Heritage. State test scores indicate that Ella Canavan students are 83% proficient in math and 84% proficient in reading.

Remember A. I. Root, who made Medina the beekeeping manufacturing center? He has a middle school named after him that’s highly rated. Its 825 students in grades 6-8 have 78% proficiency in math and 74% in reading-- which is admittedly lower than the elementary schools, but it’s also double the size as well. The student-to-teacher ratio is 20:1 and it offers a gifted program.

Medina High School offers an AP Program, and does well with its limited resources-- it ranks high in safety and health. It has well over 2,000 students in grades 9-12 but the student-to-teacher ratio is a very reasonable 20:1. Proficiency scores are 62% in math and 73% in reading. The average SAT score is 1200 and the average ACT score is 26. Most of their senior students are interested in attending in-state colleges such as Ohio State, Kent, and University of Akron.

If you’re looking for fun things to do around Medina, don’t restrict yourself to just the town-- there’s a whole county! VisitMedinaCounty.com is a wonderful resource to find fun things to do at any time of year. It features regularly-occurring events, like Annual Medina Ice Festival and different Christmas Tree Farms in the area.

It also features local businesses for shopping, restaurants for eating out, and places to stay for when your friends and family visit and you can’t squeeze another person into the guest bedroom.

The Medina County Park District has been very busy in its 50-plus years of operation. They run school programs, a hiking series, scout programs and a young naturalist program, plus more. Fishing, biking and camping are all offered. They also host special events, such pancake breakfasts. They also operate two restoration projects-- Chippewa Lake Upper Watershed Stream Restoration and Princess Ledges Stormwater Management Project-- and Citizen Science Projects as well. Their mission is to “...Enhance the quality of all life through education, conservation, and the protection of natural resources” through the Core Values of Integrity, Transparency, Sustainability, Communication, and Collaboration. With fourteen parks from which to choose, there’s a natural space for everyone to enjoy!

So when you’re moving to Medina, Ohio, you’re moving to a community that loves to be together-- in parks, neighborhoods, and business. It’s safe, well-educated, and surrounded by natural beauty. What more could a new resident ask for?

25 Reasons to Move to Medina, Ohio

10 Things to Do in Medina, OH with the Whole Family

Moving to Medina, Ohio? Here’s Everything You Need to Know

10 Things to Do in Medina, OH with the Whole Family

By
Kaitlyn Harris
Around Ohio
//
Medina