Tracing the History of Cincinnati’s German Roots and Cultural Ties

The Home of the Largest Oktoberfest Celebration in North America 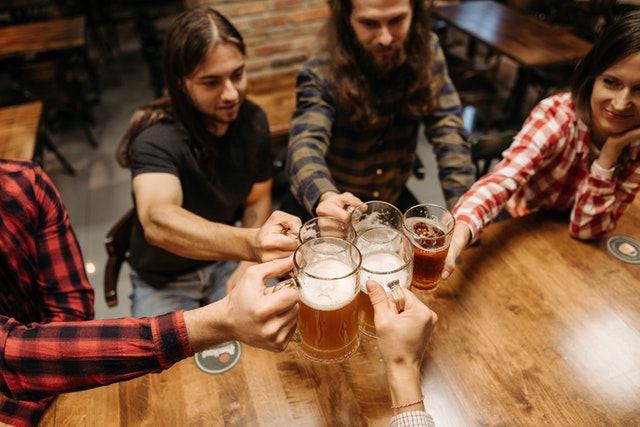 These staggering numbers mirror a heavy German migration to the area around the 1830’s and beyond. A large number of refugees fleeing the German revolutions of 1848-49 settled in an area called Over-the-Rhine, and the city outskirts north of Miami and the Erie canal due to cheap rental properties.

The large influx of German immigrants gave rise to the city we are familiar with today. Home to over 50 breweries, such as Rhinegeist, Wiedemann’s, and Mecklenburg, Cincinnati garnered the nickname, “Beer capital of the world,” and was known to brew up to 35 million barrels at one time.

As beer moved in so did the German food culture. This gave rise to the popular Hofbrauhaus and Wunderbar! These restaurants showcase a variety of beer, German foods, and of course homemade sausages.

These are just a few of the ways that we can see that German heritage has made a lasting impact on the modern culture and society of Cincinnati today.

Let’s dive further in depth into the history that has crafted the city we know today:

The city itself was founded in late 1788 or 1789 and was home to primarily native-borns who traced their heritage to English, Swiss, and French immigrants. In 1828, the Miami & Erie canal had been completed -- it linked the Great Lakes with the Ohio River and all surrounding land. This gave rise to a bustling trading hub and also lent its name to the area of Cincinnati known as Over-the-Rhine.

The name of the neighborhood comes from a tongue in cheek reference to the Rhine River in Germany. Residents thought crossing the Miami & Erie Canal was the equivalent of crossing over the Rhine River and into Germany.

The Rhine River is one of the major European rivers that flows from its source in Switzerland through Germany and the Netherlands, eventually emptying into the North Sea. It became a symbol of German nationalism in the modern era. Residents viewed the Miami & Erie Canal in a similar manner because once they crossed the bridge, they were essentially entering a different world -- the German world.

During the 1830’s, mass numbers of Germanic settlers began arriving in the city. Despite this, Germanic settlers only made up a small percentage of the city population until it began to rapidly increase in the mid 1850’s.

The German settlers opted to move into lands north of the Miami & Erie Canal, largely due to cheap rental prices as it was mostly gardens and farmland. The Germans would later turn this empty plot of earth into a bustling neighborhood. Once Over-the-Rhine hit its peak population of 45,000, nearly 75% were second-generation German Americans.

The Germans not only transformed the landscape, but also the culture that significantly impacted daily life. English became a second language to German, it was used in schools, churches, and newspapers -- including four German-language newspapers.

As German churches, schools, clubs began to appear, so did saloons, beer gardens, restaurants, and theatres. A number of theatres ranging from legitimate to burlesque found homes in the neighborhood.

By the end of the century, the majority of residents came from working class German-Americans.

World War I and Prohibition

The bustling neighborhood full of life and German culture met its turning point during WW1 and the following Prohibition. With the German culture came the importance of beer and brewing a high quality creation. At the end of the century, residents of Over-the-Rhine were heavily invested in brewing, and nearly a dozen breweries made their impact on the local economy.

Despite the breweries being small, they managed to produce hundreds of thousands of barrels each year. Founded in 1853, Christian Moerlein Brewing Co. became one of the largest in the United States. This brewery in combination with many others were responsible for employing thousands of the city’s residents. Secondary industries made their debut as a result of brewing -- barrel and bottle production, ice delivery, beer distribution and shipping all became major players in the local economy.

The booming brewing industry met its drastic decline when the economic and social impacts of the Prohibition began to take hold of the community. Family businesses were left in ruin while thousands of jobs were eliminated. The anti-German hysteria that accompanied WWI made sure that the neighborhood no longer celebrated its German heritage.

The turn of the 20th century in Over-the-Rhine can be characterized by poverty and a shift in cultural dynamics. In the early 1900’s, the city was still a lively working-class neighborhood, until the transportation sector began to improve. The densely packed, small apartment buildings that were home to the working class population were taken over by the working poor. With the new rise of public transportation and automobiles, those that could afford them left Over-the-Rhine to live in the surrounding hilltop neighborhoods and thus great poverty took over.

The Depression led American born immigrants from eastern Kentucky and Tennessee to move into the city. They left their failing farmlands and jobs in the coal sector for industrial work. Since these industrial jobs were in close proximity to the neighborhood, they lived in small, coldwater tenements because that is what they were able to afford.

With this new swarm of immigrants, Over-the-Rhine saw a new wave of culture, this time from Appalachia. Bluegrass culture saw the rise of many musicians and artisans, such as pioneer Katie Laur.

In the mid 1900’s, Over-the-Rhine once again saw a transition in demographics. With the construction of interstates I-75 and I-71, neighborhoods largely filled with African Americans were eliminated to make way for new transportation routes. As a result, they were forced to fill vacant housing along with the leftover poor and working class Appalachian tenants.

Living conditions were extremely poor, cramped, and often unsanitary. The 1960’s and 1970’s saw a surge of reformations to transform the historic buildings to more energy efficient and easier to clean spaces. However, as the 1980’s rolled around, most housing was Section 8, and crime rates and poverty increased.

As the 1990’s approached, groups of concerned citizens formed a coalition to restore and improve the neighborhood. They brought back life to the main street, restored the facades of many historic buildings, and fought to save other historically significant buildings.

Despite a bumpy road with ups and downs, Over-the-Rhine is starting to see improvements and become a different, but better environment.

Oktoberfest Zinzinnati is an annual celebration held in the city that has taken place every year since its beginning in 1976. It is described as the largest Oktoberfest celebration in the United States and attracts nearly 500,000 visitors every year. This celebration falls only second to the world’s largest, which is held in Munich.

The city closes off six blocks of its downtown area to make room for the large celebration. Visitors will encounter street dancers and performances, concerts, eating contests, toasts, and the world’s largest chicken dance. The festival claimed its world record in 1994 with over 48,000 chicken dance participants.

The food comes in vast quantities and pays homage to the traditional Germans foods that many love to enjoy. These foods include sausages, brats, and metts -- nearly 225,000 are made and sold for the festival, that’s a quarter million types of sausages. However, sausages are only part of the deal -- sauerkraut balls, jumbo pickles, german potato salad, Limberberg cheese, pigtails, pickled pigs feet, and 3,600 pounds of sauerkraut all find a home at this event. The desserts are usually the traditional cream puffs and strudels. Last, but not least are the ever popular soft pretzels, including a massive six pound soft pretzel that is made by Servatii Pastry Shop.

The celebration also holds an annual event called ‘Running of the Weiner Dogs.’ This event is exactly as it sounds -- dachshunds are dressed as hot dogs and left to race each other in different heats. The event usually includes around 100 furry pups. They race down a 75-foot stretch of road until a winner emerges as the heats are narrowed down to the final. Furry competitors are assisted by two human counterparts -- one responsible for hyping them up at the starting line and one awaiting them at the finish line with their favorite toy. Of course dogs are unpredictable -- some run straight for the finish line while others get distracted and admire the scenery or chase the other competitors.

Unfortunately, due to the COVID-19 pandemic, all 2020 festivities could not be held in person, but that did not stop this giant event from taking place. Participants were still welcomed via Zoom or the Oktoberfest Facebook page.

Staying in Touch With German Roots

With its rich German history and culture, Oktoberfest is not the only way that this heritage remains a crucial part of Cincinnati society. Many societies exist that allow people of German ancestry to come together and celebrate their joint heritage.

Cincideutsch is another society that gathers at Mecklenburg Gardens every Monday and holds a ‘regulars table.’ Those who attend these gatherings will learn about homebrewing, the local music scene, downtown events, and other cultural events throughout the area.

FC Bayern Fan Club meets during Saturdays and Sundays at Mad Tree Brewery for soccer, or football, matches and viewing parties -- all ages can attend that are 18 years of age or older.

Kolping Cincinnati, Germania Society, Cincinnati Donauschwaben society, and the German-American citizen’s league are all societies that help those with German ancestry come together and learn more about their traditions and culture.

The Munich Sister City Association of Greater Cincinnati also offers a number of exchange programs for high school and college level students. They also offer exchanges in the arts and culture, law, and business and government.

Last but not least, those who still speak and share the German language can attend St. Mary’s church on Sundays to participate in a Roman Catholic Mass that is conducted in German.

The city of Cincinnati has a long and rich history of German ancestry that dates back to the 1830’s. These German-American citizens were responsible for transforming the landscape and implementing their traditions and culture into society. This lasting impact can still be seen today by those who celebrate Oktoberfest or continue to honor their heritage by joining a club or society that has its roots in Over-the-Rhine.