Living in Cleveland has never been so good! 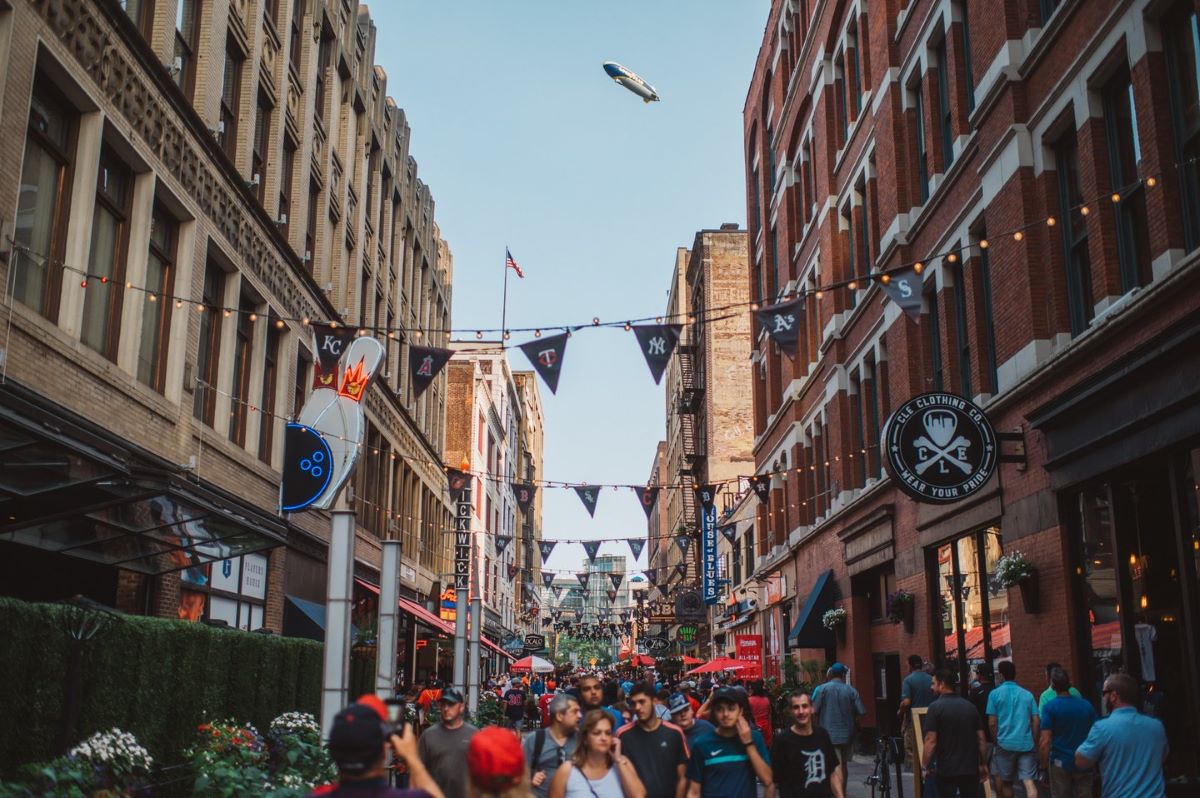 Image Courtesy of This is Cleveland.

In this guide we’re going to discuss:

It’s Full of Amazing Eateries — Which Will be Your Favorite?

Salt is a small plates restaurant with exquisite food cooked by Jill Vedaa. They cook a variety of plates inspired by cultures all around the world, making each one a unique blend of flavors and textures. There’s something for everyone at Salt, and it is the perfect place to go with a few close friends or family and share a fantastic dining experience.

Your Go-To Taqueria in Cleveland Area

Looking for a go-to Taqueria in Cleveland? Look no further than La Plaza Taqueria! No matter where you live, it is essential that you have a taqueria serving up authentic Mexican-style food nearby, and La Plaza is the place to be. With a plethora of fillings and toppings, you can craft your perfect taco and watch it get assembled by their excellent kitchen staff and be eating delicious tacos in a matter of minutes!

Il Rione is located in the heart of West Side Little Italy, and they strive to pay homage to all the immigrants who have worked to turn Cleveland into the shining city that it is today. Il Rione is a constant provider of delicious, handmade pizza, and it’s a great place to stop by if you are looking for top-notch, NY-style pizza.

Start Your Morning Right With Coffee, Pastries, and Sandwiches

Cleveland Sports are a Fun Watch

Cleveland has a great roster of sports teams. Not necessarily because they are the best in their sports, but because it is always a blast going to their games. The Browns are no exception. FirstEnergy Stadium, home of the Cleveland Browns, seats over 65,000 fans and is home to many great games of football. Whether you are a Browns fan or not, there is always good football to be had at Cleveland’s stadium!

Adding onto the roster of Cleveland sports is the Cavaliers. Another great team to support, or if you are a strong fan of another basketball team you can just go and watch some good ball. The Cleveland fans are a good crowd and will make the game exciting even if you don’t care who wins.

Another excellent pro team — the Cleveland Guardians. The baseball team in Cleveland is another reason to move to this great city in Ohio. Having an in-town baseball team makes it very easy to travel to and from the games as well as opening up the possibility for going to games on a whim! If you have a night with no plans you can check to see if there’s a game at the stadium! It’s a great place to go with friends and family and relax stadium drinks and snacks.

Cleveland is Full of Nice People and Great Culture

Cleveland is a city with around 385,000 residents, making it currently the 54th largest city in the United States. That puts it in a great position where you get the best of both worlds when you arrive. There is plenty to do, great sports, great food, great activities, but it does not have some of the downsides of the biggest cities like constant traffic and crowded streets.

Also, the people of Cleveland are great! The community is strong and the people are pleasant. Cleveland is also not too big where you feel lost in the constant river of humanity flowing through the city. There is space for you to get a place in the community, make friends, and settle in!

Cleveland is still a very affordable place to live. Recently, the affordability and demand of homes in Cleveland have resulted in a tremendous rise in the number of homes sold in Cleveland. The start of the new year is a great time to buy or rent in Cleveland. Many people are also investing in the housing market, meaning there are a lot of rental properties available as well. Cleveland’s housing market is very strong and, importantly, resistant to dips in the real estate market.

Clevland’s size makes it an excellent place to look for job opportunities. Due to major centers like the Cleveland Clinic, University Hospitals of Cleveland, Medical Mutual of Ohio, and MetroHealth, the healthcare sector is a major employer of Cleveland’s residents. Alongside this, the construction, manufacturing, and finance industries are also growing rapidly in the Cleveland area.

The Cleveland Clinic is a fantastic healthcare system, made up of nineteen hospitals worldwide, with nearly six thousand beds between them. The Cleveland Clinic integrates clinical and hospital care with research and education, never stopping in their efforts to further the knowledge of the medical field. Knowing that a world-renowned hospital system is in the heart of Cleveland is a great bonus for living in the Greater Cleveland area.

Strong Schools and Universities in and Around Cleveland

The Cleveland Metropolitan School District is a sprawling district that contains many schools, students, and families. This district works towards giving fair and good education to all of their students, giving them opportunities to learn in the way that’s best for them. It is important to research what schools are best in the area when looking for a home in Cleveland.

Cleveland State University is a great college of around 15 thousand undergraduate students in the city of Cleveland. There are a lot of colleges and universities within the city limits and around the state of Ohio, and it is great to have excellent college opportunities as close as Cleveland State.

Case Western is another great university within the city of Cleveland. Home to almost six thousand undergraduate students, this private college was ranked 42nd amongst universities countrywide in 2021 by the U.S. News and World Report. Case Western is highly ranked among the country’s research universities, encouraging students to tackle big issues of the present and the future. Having an esteemed university like Case Western right around the corner is a great reason to live in Cleveland, and might convince your kids to stay nearby when they head off to college!

Living in the state of Ohio has its perks as well. There are a lot of great state colleges and universities like Cleveland State, Ohio State, and Ohio University. You can enjoy their in-state tuition if you are living in Cleveland.

Move Around the City with Ease Using Public Transportation

Although this train is a non-stop trip to the North Pole, there are trains and trolleys that go in and around the city as well. With the buses, trains, and trolleys, Cleveland has many options for public transportation. Having this many options is a great reason to live in Cleveland.

Alongside the train and trolley, The Greater Cleveland Regional Transit Authority bus routes are reliable and cheap ways to navigate the city if you are living in Cleveland. It is not perfect, but all the bus routes in this city are a great way to move around the city’s districts and an alternative to driving to work every day.

Having one Amtrak route in your city is a great reason to live there, and Cleveland has two!

There are a lot of great trails around Cleveland that make it easy to stay in touch with nature after only a short drive. There are many beautiful trails, some of them hundreds of miles long! Others are a more manageable couple of miles, and you can always turn back after a mile or so. Cleveland is a fairly big city, and having an escape to nature within a 10 or 20-minute drive is a great reason to want to live in Cleveland!

You Will Not be Bored Living in Cleveland!

22. Rock and Roll Hall of Fame

Live music, exhibits, and music history await at the Rock and Roll Hall of Fame. This museum is a treasure trove of musical history and one of the best places to bring friends and family who are visiting you in the city. It is also a great incentive to have them swing by in the first place!

There are many venues and attractions within Cleveland to explore with yourself, your friends, and your family when you are living in Cleveland. The Cleveland Theater runs a wide variety of fantastic Broadway shows with incredible casts and crew, rotating through different productions to keep something fresh on stage for you to go to on a regular basis.

Cleveland is home to many amazing museums, the list includes the Museum of Art, the Rock and Roll Hall of Fame, the Museum of History, and many more! These museums make great day trips for city residents and visitors alike, and are a great reason to settle in a city as great as Cleveland.

The entertainment scene in Cleveland extends far beyond the arts! Less than an hour and a half away is the acclaimed amusement park Cedar Point! This renowned park draws visitors from all over the country, boasting some of the greatest roller coasters of all time. And it’s right outside your doorstep. Having a place like this so close by is a phenomenal reason to live in Cleveland.

To finish off the entertainment theme — the classic orchestral concert scene in Cleveland is great. The Cleveland Symphony Orchestra puts on amazing concerts throughout the year, adding another reason to live in Cleveland. Having a great orchestra at the city’s performance hall opens up a whole new way to spend a night on the town!

Nature is Right Around the Corner

While the weather is nice, biking around Cleveland is very easy! Hitching a bike on your car and driving out no more than 20 minutes opens up a world of possible trails perfect for every skill level of biker.

All around Cleveland, there are beautiful parks and green spaces to soak up some nature and take a moment to step out of the city. With so many options, you will never get bored of all that the Cleveland MetroParks have to offer. During the Spring and Fall, especially, taking a day and spending a few hours in the park is a great way to relax and unwind.

Thinking of Living in Cleveland?

Cleveland is full of amazing opportunities, and there are plenty of reasons to live in Cleveland. If you’ve been — what’s your favorite part about the city? Let us know in the comments!

Moving to Cleveland, OH? Here’s Everything You Need to Know

5 "Must See" Places in Cleveland

Check Out These 6 Magnificent Holiday Light Up Shows in Cleveland

The Best Places to E-Visit in Cleveland, Ohio to Get You Through Quarantine

So Many Options To Spend Your 2019 New Years in Cleveland

Moving to Cleveland, OH? Here’s Everything You Need to Know