Moving to Circleville? Here’s everything you need to know 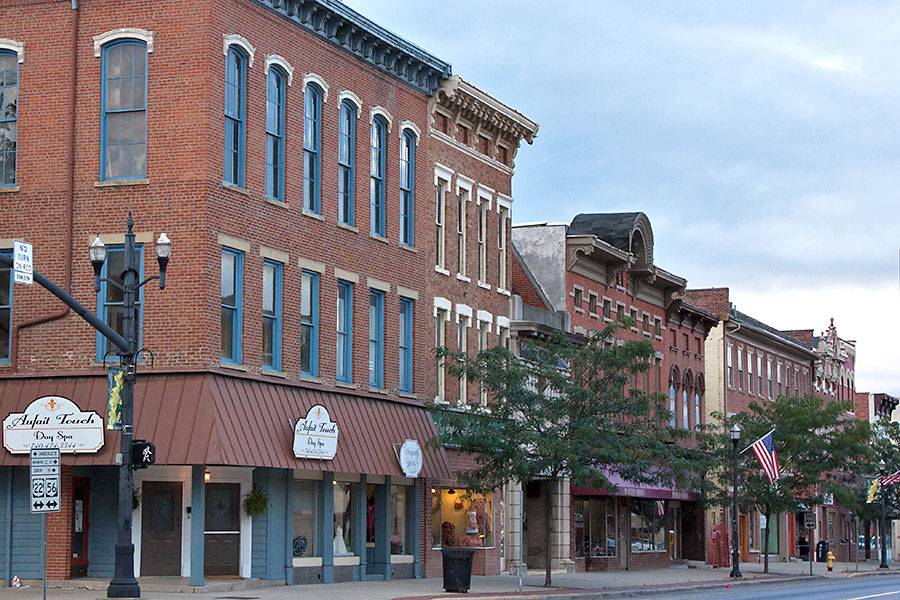 This quaint, historical town is just over a half an hour drive from Columbus, but if you’re planning to move here, you should probably know a bit more about Circleville than that. Although it may not seem so at first, this town as plenty to offer, if you look closely. So, come along with us as we take you on a journey through this quiet town.

Circleville is a relatively small town, with the 2010 census showing that it has over 13,000 residents. The mean age of these residents is 39, and their median household income is $39,610. The median home price is $123,700, making it a relatively affordable place to live.

This historical map, created in 1836 by G. F. Wittich, shows the original circular structure of the town

Founded in 1810 by Daniel Dresbach, this town was first named Circleville to reflect the circular earthworks that had been constructed by Native Americans at the site. The town was also originally laid out in a circle, but residents soon tired of the inconvenient streets. In 1837 reconstruction began, laying out the streets in a more conventional grid pattern and destroying most of the Native earthworks.

Circleville truly reached its peak mid-19th century, when its easy access to the Scioto River and new connection to the railroad system boosted its manufacturing industries to new heights. Drawing on Circleville’s agricultural roots, these industries were able to use local raw materials to create high-quality products, then ship them elsewhere in the country by boat or train.

While Pickaway County is still primarily agricultural, the importance of agriculture to Circleville has been steadily declining as people working in Columbus, but craving a smaller community, have moved into the area. The town still retains its unique beginnings, however, and that idyllic feeling that is impossible to achieve in a big city.

It may surprise you that this little sleepy town is actually quite famous! The annual Pumpkin Show draws thousands of visitors, but there are still several gems within Circleville that these out-of-towners may not know about. Don’t worry, though — in the true spirit of an ultimate guide, this post misses nothing, including:

Circleville is most famous for its annual pumpkin show, which has also been called “The Greatest Free Show on Earth,” since there is no admission fee. Up 400,000 people flock to Circleville for the 4-day event, but luckily the event has recently added a preview night for locals only so that you can beat the crowd. The official dates are October 16-19, from 10am to 10pm.

The festival is huge, covering 8 city blocks and containing rides, food, games, crafts, parades, and concerts. Plus, more pumpkins than you can even imagine, of course. In terms of the pumpkins, the main event is the giant pumpkin competition. The current record-holder, Dr. Robert Liggett, won in 2014, with a pumpkin weighing in at a whopping 1,964 pounds. Perhaps even more impressive than the giant pumpkins, however, is the giant pumpkin pie made by Lindsey’s Bakery every year, which weighs 400 pounds and is donated to hungry hogs after the event.

To remind Circleville residents of their pride and joy year ‘round, a water tower on Town Street was painted to resemble a pumpkin — complete with a stem!

Where to Eat in Circleville, OH

There are plenty of local businesses that are unique to Circleville, and the restaurant scene is no exception. From sweets to meats, it’s all there.

A Sweet Taste of Circleville

Mentioned earlier for their giant pumpkin pie, Lindsey’s Bakery pours that same amount of effort and love into each of their smaller bakes. Their fresh pumpkin doughnuts are a local favorite, along with their thumbprint cookies. These sweet treats aren’t the end of their inventory, either — they have plenty more on their menu, and you can order custom cakes there as well.

“Best thumbprint cookies you will ever have for sure. Been in same spot for decades and is awesome every time. Very well known for their pumpkin donuts which are fantastic for sure and you should buy a dozen. Worth the drive from wherever you are from.” - Drue G. on Yelp

Good People and Even Better Sandwiches

The owners from New York bring a little taste of the Big Apple to little Circleville with their genuine Italian deli. Their meats and cheeses are of the highest quality, and their sandwiches are true works of art. In addition to their wide array of sandwiches, they also offer traditional deli items, Italian desserts, and a gluten-free selection of desserts as well.

“This was the best! Real NY sandwiches at affordable prices. The owner was very nice and as a first timer, provided 2 free cannolis (which were amazing!) Will definitely return.” - Ellen T. on Yelp

Spend Your Friday Nights at this Local Gem

In addition to a hopping happy hour, Watt Street Tavern is a great place to meet up with some friends for brunch, with much acclaimed Bloody Marys and a cozy atmosphere. They also offer specials Monday, Tuesday, and Wednesday — Monday is pizza, Tuesday is tacos (of course), and Wednesday is beer. Their classic American menu won’t disappoint, and you will be delighted by their selection of craft beers on tap.

“Good local hangout and very popular with "the locals" at lunch and happy hour. The food selection is really good with something for just about everyone. Good service and good prices along with great drinks make this a sure stop if you are in town!” - Rob M. on Yelp

This Chinese place is a Circleville staple that’s been around for long enough that no one remembers when it was founded. It’s a nice break from the classic American dishes that the town loves so much, adding some spice to the Ohio diet. This is a true family-owned business, with a pair of sisters working dawn till dusk everyday except Sunday to keep it running. Judging by the quality of their food, their hard work is certainly paying off.

“Best hot and sour soup ever!  I get the chicken pad Thai about once a week too.  I always get take out because service in the restaurant is kind of slow.  Great local place that's been around a very long time.” - Kelly M. on Yelp

A Cute and Cozy Alternative to Starbucks

This cozy local coffee shop is located in downtown Circleville, surrounded by distinctive boutiques that could be fun places to explore. In fact, it’s quite close to the Ted Lewis Museum, making for a great pit stop before or after your museum adventures. Their coffee is generally comparable to Starbucks, but at a cheaper price point and with a more enjoyable atmosphere. The seating area looks much like someone’s living room, with a cushy couch and a fireplace that will make you feel at home. In addition to delicious coffee, they also have full breakfast and lunch menus.

“The baristas are really sweet and the atmosphere was fun and laid back. I enjoyed a frozen mocha (although I'm typically a black coffee kind of gal) and it was delightful. A friend and I lounged on the couches, enjoyed a bagel and some coffee. A lovely place perfect for breakfast, lunch, or just a frozen mocha!” - Amber S. on Yelp

Congratulations — you’re now a Circleville expert! Hopefully, this guide can help you become more comfortable in your new home and allow you to fully enjoy the charm of this small town with a unique culture.

Things to Do in Lovely Circleville, Ohio

Best Restaurants in Circleville Based on Your Budget