Find that Small Town Feel in this Cozy Columbus Suburb 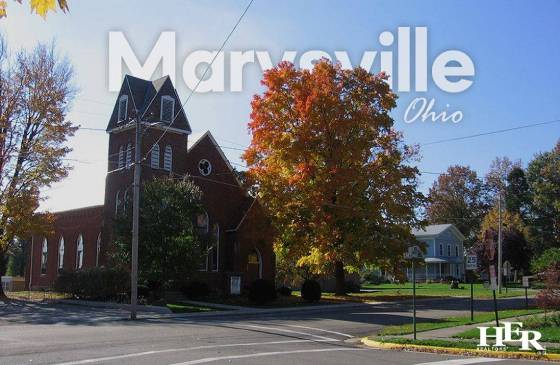 Here’s a place where you can finally stop searching for greener pastures.

When Marysville first popped up in Ohio in 1819, it was nothing more than a couple of families settling into the area. As the head of the family, Samuel W. Cuthbertson is considered the founder of this city and reportedly named the area after his daughter. Five years later found four families Marysville residents still doing well for themselves, but fairly stagnant in terms of growth. They established a post office, and this is likely when Marysville officially established its place on the map.

In the late 1820s, there were enough children in the area to open Marysville’s first schoolhouse, a log cabin. Ten years later, there were three schools up and running in the city, and Caroline Humphrey opened the first high school in 1943. The population was growing. Though the city’s foundation had started with only a couple families, by the end of the century, its population had grown to nearly 3,000 residents. Over the course of the twentieth century, new residents began to move into the area in flocks. Today, there is an estimated population of 24,000 people.

Law and Order in Marysville, Ohio

As the hub of all major government operations and buildings in Union County, Marysville is considered the county seat. Essentially, this means that the city isn’t only responsible for the governmental happenings in their city-wide area, but also for the governmental happenings of the county at large. Marysville is home to the Union County legislature, which participates in the state caucus, as well as the courthouse, sheriff’s department, hall of records and correctional facilities, which work together to form Marysville’s judicial system.

On top of the tasks they carry out for the county as a whole, Marysville is also responsible for the running of their local city government. Locally, the city operates under a Council-Manager form of government. The Council is comprised of seven elected members, each of whom serves for four years. Three of those elected are done so by the city at large, while each of the other four are chosen by one of the four official neighborhoods of the city.

The Council’s duties include approving the city’s budget and any programs necessary for the smooth operation of local businesses, enacting and enforcing all local laws and ordinances, and promoting the Marysville population’s overall health and safety. City Council meetings are held on the second and fourth Mondays of every month at 7p.m. in the Council Chambers at 209 S. Main St. Meeting minutes are recorded each time the Council is in session, and, once they are approved, you can find them online at the City of Marysville’s website.

Marysville’s local police serves the public for both emergencies and non-emergencies. That being said, please only use their local number for non-emergencies; in the case of an emergency, dial 9-1-1, and they will be dispatched to your location. In all of their work, the Marysville Division of Police operates under four guiding principles: dedication, integrity, courage, and empathy.

For your convenience, Marysville Division of Police has an online police report you can fill out if you are the victim or witness of a crime. Please check the guidelines for filing an online police report before beginning the process, as some crimes require you to file a report in person. As a part of their non-emergency services, the local Marysville police are happy to also assist you with bike registrations, fingerprinting and employment background checks, neighborhood watches, checking up on your home if you are away for an extended period of time, special duty services for local events, and they even offer self defense classes for women in the area!

Marysville’s local fire safety services are a pillar of the community. With two stations--one on Main Street and the other located out on County Home Road--Marysville Division of Fire serves over 30,000 people living in the City of Marysville, as well as Paris, Dover, and a portion of Darby Townships. Their services include anything from promoting fire safety education to putting out dangerous fires in the area.

As a testament to their dedication to safety, Marysville Division of Fire has advocated for the implementation of “Knox Boxes,” which are designed to hold up under extreme temperatures and are, essentially, as strong as Fort Knox--and their advocacy has paid off!

Under the Marysville City Code, Knox Boxes are now mandatory for any buildings containing hazardous materials, any multi-family residences with restricted access and a communal hallway for living units, and any non-residential buildings with fire detection systems that are monitored by outside alarm companies. With this code in place, fire fighters are now able to quickly make their way into any of these buildings without the need of any forced entry.

The Marysville Division of Fire also does a lot of work to promote the prevention of fires in the city. Inspections are mandated under the city code, which means that any new businesses or homes that spring up must undergo a rigorous fire safety inspection by the department before they can be deemed fit for the public. They also offer classes to the people of Marysville, ranging anywhere from showing you how to use a fire extinguisher and how to plan the best escape route if your home catches on fire, to lessons on how to care for your real Christmas tree.

Women take the lead in gender demographics, coming in at 55% in the most recent demographic studies, although there is no information about people who exist outside the gender binary at this time. There is no current data about the opinions of the LGBTQ+ population. Though Union County’s status as a “Republican Stronghold” would suggest that the community tends to lean more conservatively, other records indicate that Marysville is only “somewhat conservative.”

Marysville is still primarily a white community at this time, but more recent years have been bringing in a slow trickle of more diversity. At this time, 87% of the population has identified themselves as white, with no Hispanic or Latinax heritage. Five percent of Marysville’s people are Black, 3% are Asian, 2% are a combination of two or more races, and 2% are Hispanic or Latinax.

Interestingly, the 2010 census also suggests that Marysville isn’t all that religious. Reports from Union County as a whole indicate that 69% of the population doesn’t follow a particular religion, while 25% practice some kind of Protestantism, 5% practice Catholicism, and 1% practice something else.

Out on the Town: What to Do in and around Marysville, Ohio

There are plenty of activities for you to partake in, both in and around Marysville. From yearly events you’ll notice returning to the community annually to smaller events that pop up in Union County areas surrounding the city, there’s almost always something going on that will earn you some new Marysville friends.

While Marysville is big enough to be called a city, it really is very rural at the heart of its culture. As a center for agricultural research for Ohio State University, Marysville has plenty to offer in terms of locally sourced food. What better place for them to showcase that than the Union County Farmers Market?

This year, the Farmers Market is taking place once a week in both Marysville and neighboring Richwood (although we reckon the Marysville one will tickle your fancy a bit more). They are both beginning in mid-May, the Marysville one a few days prior, and each week you can head out to their specified locations on either a Thursday or a Saturday from 8:30a.m. - 1:30p.m. to see everything Union County has to offer.

The Union County Farmers Market is all about celebrating locality. At each market this year, you will find goods that are locally grown, made, raised, and baked right in Union County. Among these, look for fresh fruits such as strawberries, raspberries, and rhubarb; vegetables such as asparagus, peppers, zucchini, and sweet corn; freshly baked goods such as bread, cakes, cookies, and scones; preservatives such as honey, jams, and jellies; and hand-crafted goods like soaps and wood products.

At the very end of the Farmers Market, there’s going to be a festival in Partners Park, complete with tractor rides and fall-fun. Mark your calendar now so you can be sure not to miss it!

Also right in the heart of Union County culture and community is music. This year, Marysville is going to be hosting a fun-filled musical event known as Friday Night Uptown in Partners Park. The details are not all available as of yet, but for now, we can tell you a few things.

The event will take place on August 21 from 6p.m. - 10p.m.--enough time to give you a fun-filled evening but still get home in time to tuck your kids into bed when they inevitably wear you out. Of what we know so far, the acts are going to be playing live music ranging from British Invasion to tribute bands.

Watch the link we’ve provided above for updated information about the specific acts that will be performing, rules and regulations for attending the event, and (most importantly) what food will be available on site.

If you’re looking for something a bit different to do, taking a trip out to Plain City might be just what you’re looking for before the kids go back to school in the fall. The Plain City Classic Car Cruise only happens once a year, and it’s the kind of spectacle that everyone needs to see at least once in their lives.

With over 100 classic cars owners driving into the area to show off their babies’ bodywork, paint jobs, and just overall motor prowess, there’s a special kind of community that forms out of car shows. Owners will drive their cars in early on the morning of August 22, park them with their motors facing towards the center of the street, and the roads will be closed off so people can walk along and view all of the hard work that people put into caring for their classic cars.

There will also be plenty of local food to indulge in throughout the day, and you can talk extensively to people about what goes into caring for a classic car. If you already know and you have your own that you’d like to show off, contact the Plain City Planning Committee to see what you need to do to enter the show.

Marysville has plenty to offer to new residents. They place a lot of stake in their law and order, and they are growing steadily--both in numbers and diversity. We may not know what Samuel W. Cuthbertson loved so much about his daughter Mary that drove him to name this city after her, but her name lives on, regardless.

The Ultimate Guide to Marysville Ohio

The Ultimate Guide to Marysville Ohio