Moving to London, Ohio? Here’s What You Need to Know

A charming little town, an escape from the city, London captures old-town Americana and family values 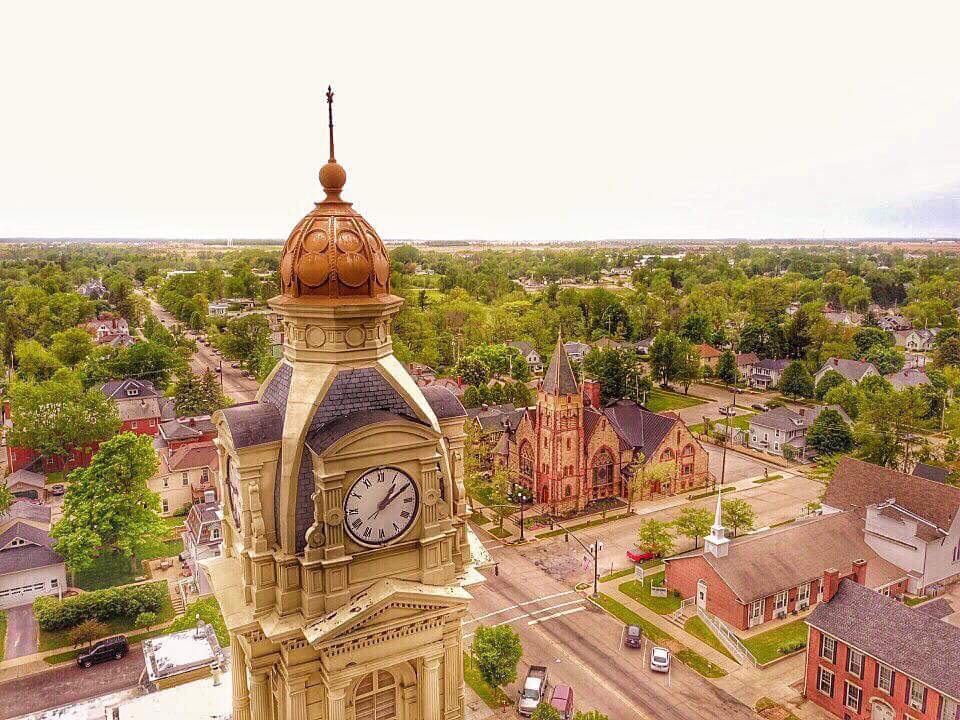 A charming little town just begging to be lived in, London can fulfill your wildest old-timey dreams. Image courtesy of LINK.

London, Ohio, a city nestled cozy in the middle of the state, is the county seat of Madison, Ohio. With Columbus only twenty five miles away, London is a great city to live in and commute from, if you want to avoid all that hustle and bustle. A charming little city with rich history, gorgeous architecture, and plenty to do, London is a lovely place to move to.

Want to know more about the city? Read on for everything you need to know about moving to London, Ohio.

Wacky but wonderful history- a city calling to all

London, Ohio, was established in 1811 to serve as the Madison county seat. A county seat functions as a capital of a county, a central place for government in the surrounding area.

A year prior, in 1810, the first settlers arrived in the land that became London. The first order of business? Organizing and founding a Methodist church, now known as First United Methodist church. In 1820, the residents labored away at building this tiny log church, London’s first ever religious center of its kind.

There was an orphanage near this church- and run by church attendees- in heavy operation, so in the early 1900’s the church built storage to keep human milk fresh onsite. You’d think that would be the weirdest historical fact about London, but no!

No one knows why this city was named London. Speculation has it that many of the residents, being from Great Britain, had named it after the infamous city there. Still others think the name has to do with the London Company, a company that surveyed the land that would become London.

In the mid 1800’s, construction completed two railroads that went across London’s land. This construction brought forth industry and more settlers, rapidly contributing to London’s growth and populus. In the late 1850’s London became known for its livestock auctions, holding many of them throughout the year that brought forth citizens from all over the United States.

As London grew, more citizens from busier cities in Ohio, such as Columbus, began to emigrate here. People wanted an escape from the hustle and bustle of the city life, but they still wanted a community, and London provided this in plenty. Comprised of many neighborhoods, London became a central living area for families and working people. Many residents commute to Columbus and other nearby cities and townships. Many others also work for the London Correctional Facility, a state prison in Ohio.

A close-knit community reflected in its public offices

London’s government is similar to any smaller town or city government- everything is housed in City Hall, with the Administration Office serving as the information hub of the city. Anything you need to know can be found here. The Mayor’s Office has multiple points of contact, and they’ll be sure to get you in touch with whomever can solve your problems.

London has a city’s typical departments- Fire, Police, Parks and Recreation, and the Streets Department. If you’re interested in local government or want to get involved, their meeting schedule is always up on their website, or you can contact any of the City Directors.

London’s school system may be small, but this tight-knit nature of the schooling allows for maximum community. Your children will certainly come to know everyone in the city. London has one Elementary, Middle, and High school, as well as the religious St. Patrick School. All schools are considered to be in the same district under the Madison County Area.

London’s schools are typical of schools in Ohio- in general well-standing, with a good faculty to student ratio, and plenty of extracurricular activities and sports to keep your children occupied and happy.

London’s schools, on average, spend around ten thousand dollars per student. There are roughly sixteen students per teacher in London.

Lots of organizations and loads of religious opportunities

London as a city is very focused on community involvement and religion, simultaneously. London has many service organizations who aim to serve and provide health and wellness to the city and the larger area. Some organizations you can join include the Delphian Literary Society, which promotes literacy, London Business and Professional Women, for female career guidance and advancement, and the Madison County Historical Society, which advocates for the knowing of local and regional history in the London area.

The vast variety of organizations available show London’s values and demographics, respectively. London is home to many families and veterans, people old and young, who love to hang out with fellow community members and work together towards projects and goals.

Besides the huge amount of organizations available, London has many religious opportunities. Whether you’re already religious or not, London provides a great opportunity to expand or explore your faith. London has twelve churches and church organizations. Many religions are covered; there’s a Methodist church, a Presbyterian church, a Baptist church, a Lutheran church, and more. If you’re of the larger Christian faith, London’s offerings have you covered.

Plenty of facilities and parks- live that small-town Americana life

London’s facilities and land are laid out like old towns used to be. Lots of parks and green space, beautiful old government buildings, Victorian homes still intact. This infrastructure is paralleled in how London residents choose to spend their time- lots of time outdoors, lots of activities reliant on good weather, lots of community and fun.

London used to be populated with horse-drawn carriages. While that’s the case no longer- most everyone has cars, of course- the Olde Fashioned Christmas event held annually can take you back. Enjoy a horse ride or two, check out the lights, sip some cocoa with your loved ones. Holiday events are big in London, bringing out its small-town heritage and sense of fun.

London has three main parks: Merri-Mac Park, Cowling Park, and Creekside Gardens. These parks are all wonderfully spacious and green, with jungle gyms for the kids and your pick of benches and shaded trees to sit under. The London Municipal Pool sits on a smaller park area as well- in the summer residents meet there to swim, sunbathe, or simply chat amongst themselves about upcoming barbecues.

Along Park Avenue you will find basketball, softball, and skate park facilities. School-aged children and young adults frequent these areas, and many league practices and games are held in these areas. The facilities are monitored by the Recreation Department and the Street Department, keeping them clean for families and members of the community.

Jump right into the nit-picky

Ancestries are also a mix in London, with twenty four percent of residents being American and sixteen percent being German. Eight percent are English, seven percent are Irish, six percent are Scottish, and three percent are Italian. Quite the European melting pot.

Only about half of London’s population both lives and works in the city of London. As mentioned before, many commute to nearby hub Columbus, and many others still commute to other nearby townships and cities. London’s truly in a good central place in Ohio, perfect for any kind of commute you must make.

Based on data from 2000, London’s most popular industries are health care, public administration, educational services, and accommodation and food services. Not far behind are transportation equipment, construction, and finance and insurance.

The most common occupations in London, Ohio, are production occupations- like supervisors- management occupations, administrative assistants, and law enforcement workers.

In London, the median home cost is $135,700. Home appreciation over the last ten years is four point six percent, meaning it may be a good time to buy a home in London.

London just so happens to love clouds- and when we say love, we mean it. Most days here are cloudy to a tee. Perfect for lounging on your back, maybe even starting a cloud-watching club?

Average Ohio weather- not too hot, not too cold

Weather in London is pretty typical of the surrounding areas, and very typical to Ohio as a whole. The most comfortable months, in terms of temperature and precipitation, are June, August, and September. The least comfortable, naturally, are January and February, when it’s the coldest and snow starts falling.

The city’s precipitation, humidity, and temperature on average are usually higher than the US average. Temperatures in the summer can exceed ninety degrees, with high humidity, but the plus of this is that London’s winters aren’t as harsh as other areas of the US. Snowfall never exceeds nine inches and usually sits way, way lower. The city has less sunshine than the US average, but not to fear- the city averages many cloudy or partly cloudy days, and this helps with the higher temperatures in the summer months.

With weather pretty average and nice overall, you won’t have to worry about drastic weather changes in London. The city skies stay nice, like the place itself. Great park weather all around.

Overall, London, Ohio may be just what you’ve been looking for. If you’re a young entrepreneur who wants to live somewhere quieter and commute to nearby Columbus, London is for you. If you’re a member of a family and are looking for a cozy place to settle down and practice small-town religious values, London is for you. If you’re looking to start a family, advance your career, or just continue your life, London may be for you.

The city has facilities and amenities to suit any and all lifestyles and interests. With parks, outdoor facilities, a locally-run government, and oodles of Americana charm, London provides a calming, steady atmosphere in which to advance your life goals or raise a family.

With the above information, hopefully you now know everything you need to know about London, Ohio. Venture on!

Moving to London, Ohio? Here’s What You Need to Know

25 Reasons You Should Move to London, OH Right Now