Two square miles of the best place to raise a family! 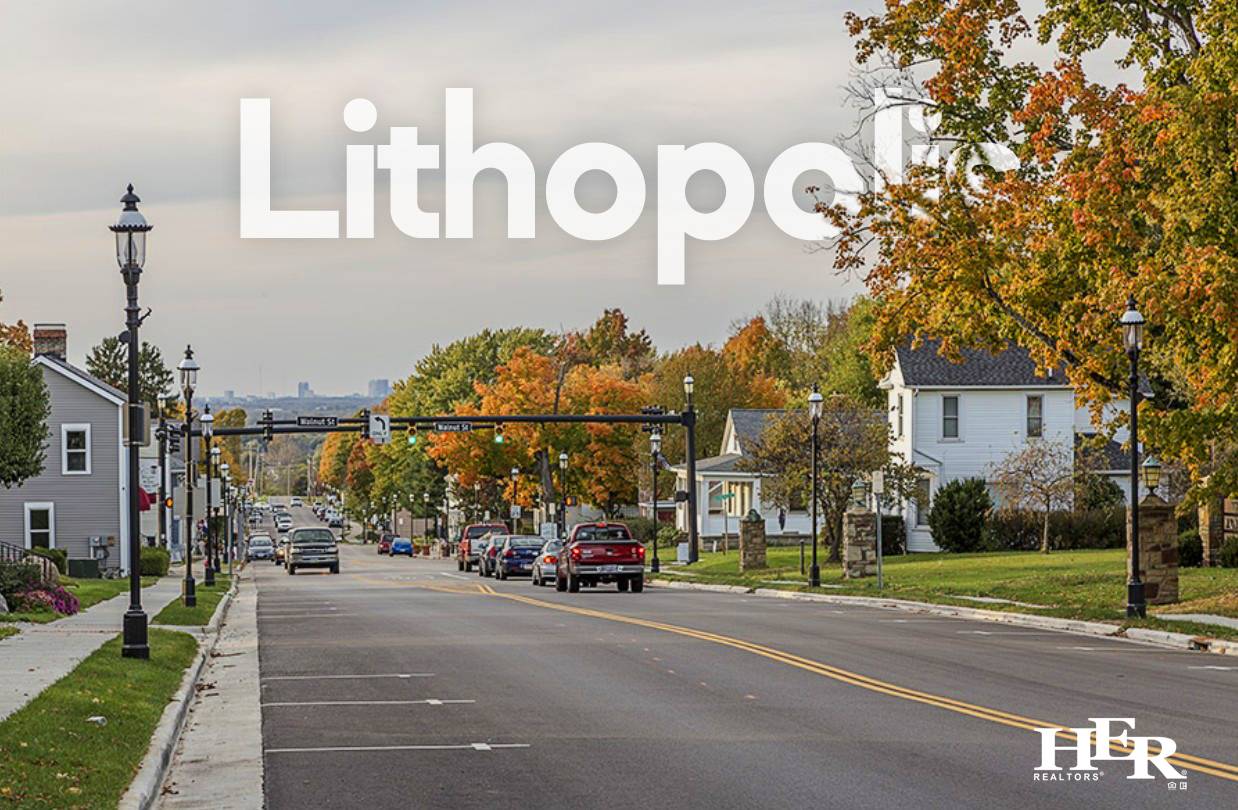 Homes for sale in
Lithopolis

Image courtesy of the Village of Lithopolis.

The Village of Lithopolis, Ohio is a tiny town in Fairfield and Franklin counties, situated near stone deposits.  The village’s name-- “lithopolis”-- literally translates to “stone city” in Greek.  Lithopolis manages to pack a lot in to a it’s just-over-two-square-miles area, and it’s growing.  If you’re thinking of adding your family to the mix, here’s everything you need to know about living in Lithopolis, Ohio.

Established in 1814 under the name of “Centerville,” the name was changed in 1815 to better reflect the importance of the area due to the stone deposits nearby.  The post office was established in 1827.

The village office is located on Lithopolis Road, and houses the offices of the Mayor, Village Administrator, Fiscal Officer, Zoning Inspector, Utility Clerk and General Maintenance.  The Mayor presides over the Village Council as President, however, has no vote unless the case of a tie.  The Village Council is elected by the village members, and serves as the legislative branch of local government.  Each serves a term of four years.  Meetings occur on the second and fourth Tuesday of each month and are open to the public.  The Fiscal Officer also doubles as the Clerk of Council.  Emails and Meeting Minutes-- as well as the Village Newsletter-- are all available on the village website.

If you’re planning on building a new house or renovating an older one (in part or in whole), but sure to check out the appropriate section on the Building & Zoning Department’s site.  There are fees and applications to fill out!  The Building & Zoning Department does not require a permit for every single home improvement, and the exemptions are listed on the site as well.

‍City Income Taxes are handled by RITA-- the Regional Income Tax Agency-- the largest administrator of municipal income taxes in Ohio.  Forms are available on both the local and the RITA websites.

Education is priceless, and unlocks many doors in life.  Therefore, when you’re moving to Lithopolis, you’ll want to know what kind of education your family can expect.  Families moving to this tiny village have many schools from which to choose, however, only one of the schools is located in the village limits.

Niche.com rated the local schools at a B or B+ rating-- the student-to-teacher ratios range from a low of 13:1 to a high of 23:1, but the proficiency in academics scores ranged all over the place.  Check out each school individually and visit the ones you’re most interested in-- try to spend a good 20-30 minutes of the visit observing a class or two to see the kind of interactions encouraged and supported between staff, faculty, and students.  Look through the textbooks-- nothing should be older than 10 years-- and ask to see samples of the type of work done in class and at home.

The Wagnalls Memorial Library was a gift to the residents of Lithopolis by Mabel Wagnalls Jones, the daughter of the Funk & Wagnalls Publishers co-owner Adam Willis Wagnalls.  Adam was born in Lithopolis.  The library boasts gardens and a theatre, and the foundation provides a scholarship.  They offer a variety of classes, events, and clubs to join and will happily host weddings and business events as the Gothic Tudor-style building is stunning.

Though the tiny village may not seem like it, Lithopolis is part of the Columbus Metro Area.

The majority of people who live in Lithopolis, Ohio are educated and make around $69, 450 per year as a household.  Individuals make around $34, 949 per year.  Both of these income statistics are slightly higher than the national averages.  The Unemployment Rate is only 3%--on par with the percent of folks in the area living in poverty-- and the population is growing.  They’ve nearly doubled since the 2010 census-- currently, around 1,500 people live in the village.  The average Lithopolis citizen is around 36 years of age and somewhat conservative.  Both genders are represented equally in the village, but the area is low in racial diversity.  It’s ranked #16 of the best suburbs to raise a family in Ohio, and the age statistics support this-- the average child is between 10 and 17 years of age.  Almost half of the village’s population has some sort of college experience or education.

The average cost of a house in Lithopolis, Ohio is $226,400 with the latest statistics placing home appreciation increasing by a bit over 7%.  The average commute is just under 30 minutes-- just like the national average-- and the weather is fairly typical midwestern weather of hot summers, cool spring and fall, and cold winters.  September, June and August are the best weather months while December and January are the worst.  The cost of living is 2.1% lower than the national average.

As you might imagine, a small two-square-mile village won’t have too many options for eating out.  One of the best options is the Mexican restaurant El Pedregal.  It’s a family owned and operated restaurant, serving authentic Mexican cuisine with a full bar service.  They claim to have the best margaritas this side of the border, and they offer catering as well.  There are vegetarian and vegan-friendly options as well, making this a perfect restaurant for a family outing or special event.  TripAdvisor highly recommends this Tex-Mex wonder for lunch or dinner.  There’s a secondary location a bit further away, but the original is in Lithopolis.

Das KaffeeHaus is rated the #1 place for coffee and tea in Lithopolis.  Theirs is the official coffee of 99.7 “The Blitz” and-- as you might guess from the name-- the inspiration for this coffee house came from the German underground.  In Germany, coffeehouses are edgy and almost pub-style-- not quiet and quaint little tea shops.  The owners-- “Frau” Amy and Joe Contino-- met in the military (we salute you both, and thank you for your service!) and began this coffeehouse as a way to synthesize their passions with their travels in Europe.  Frau Amy comes from a long line of German relatives, while Joe is Italian and still an active service member.   Their coffee roasted techniques are distinctive of their family origins-- the “kaffee” is German and espresso Italian-- and traditional, rather non-American methods are used.  The results are a lighter coffee than the typical American blend and a dark Vienna roast for espresso.  The pastries are utterly fantastic, made fresh daily, and true to Germanic street styles.

The main festival in Lithopolis is Honeyfest, dedicated to the art and education of beekeeping.  It’s held on the first Saturday following the first Monday in September, during some of the best weather that Lithopolis has to offer.  Most of the information is located on the Honeyfest Facebook page.  Honeyfest attractions include bee beards, honey tastings (trust us-- varieties you wouldn’t think of exist!), honey extraction, hive inspections, music and meade tastings.  (Meade is a delicious honey wine typically credited to the Viking and other Germanic tribes known as Normans.)  You can also grab swag in the form of t-shirts, arts and crafts for souvenirs, and a local honey beer brew from Bloom-Carroll Kiwanis beer garden.  Don’t forget to grab your copy of the Taste of Honey cookbook--maybe even have some of the presenters, musicians, and educators sign it with bits of lore and advice while you’re at it!

Lithopolis is not religiously diverse.  The population is overwhelmingly Christian.  The only places to worship listed on the village website are churches, including--but not limited to-- Baptist, Presbyterian, Methodist, Catholic and Evangelical Lutheran.  The Catholic church-- Saint John XXIII Catholic Church-- is the only church listed outside of the Lithopolis village limits, in nearby Canal Winchester, Ohio.

Lithopolis is unique but it is one of those places where if you want to get out and do something, you’re probably going to wind up driving somewhere else.  So where should you go?

Try Harrison Farm, first.  They’re a family owned and run farm in nearby Groveport, Ohio that has really begun to shine in some interesting ways.  They offer the traditional farm offerings-- tours, livestock, produce-- but they also are part of Edible Columbus and partake in farm-to-table dinners in the Hanger (yes, it really used to house the farm’s airplane).  They also offer yoga with wine or goats, photography, and painting classes.  It’s also a learning farm, so you can become an apprentice to learn the trade hands-on yourself!  Check out the Yelp reviews and call them up to schedule an appointment-- this is one community asset you don’t want to miss.

If you’re looking to get away from home for a while and don’t want to go to the city of Columbus, try Murray’s Landing.  Located in Nelsonville, Ohio, you can canoe, kayak and tube down the river.  They’re open 7 days a week, and need at least two-hour’s notice before you arrive.  Choose from one of three river adventures based upon your experience and skill level-- and, perhaps, your stress level!  Let the worries of the world fall away as you soak in the river’s calming atmosphere.