Lewis Center is a small farm town with a lot of character. 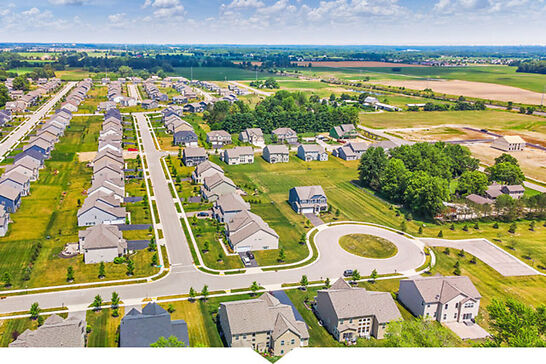 Homes for sale in
Lewis Center

Lewis Center is a community in Orange Township, which is part of Delaware County, Ohio. It is an unincorporated community of around 30,000 people. And while it is small, its zip code encompasses many different shopping centers and retail stores along Route 23. Lewis Center sits next to Africa, Ohio, a town that got its name in part due to its shared history with the town. It also lies across from the Olentangy River, which is 97 miles long. Many residents of this community happen to be of German descent, and the next largest ethnic group is Irish. It is a very quiet town surrounded by farmland. It is a great place for anyone who wants to live a calm and quiet lifestyle. If you plan to stay in Lewis Center, or even just visit, you will be enamored by the tranquility you’ll experience there.

Here’s what you should know about moving to Lewis Center:

Before Moving to Lewis Center, Get to Know the History of Your New Home

The town was founded in 1850 when a railroad was built in the area. The community is named after William M. Lewis. He was a man who gave up his family’s land so that a railroad could be built, and in exchange for that land he won naming rights. The name was originally “Lewis Centre,” but was changed to “Lewis Center” in 1983. This happened after a post office called “Lewis Centre” was established in 1852. It is the case that not too many records exist from Lewis Center’s earliest days because the area was mostly wilderness and most residents were hard laborers who did not have much time to record history. Lewis Center was a rough place to live before it became more established.

Delaware County, where Lewis Center sits, was an integral location for the Underground Railroad up until 1863. Ohio was a “free” state at the time, but due to the Ohio Fugitive Slave Act, runaway slaves were still captured and returned to their owners. Many residents of Delaware County chose to help escaped slaves head even further north. They used their homes to shelter slaves and guide them to a safer state.

The town next to Lewis Town is called “Africa, Ohio” because of its role in the Underground Railroad. Its leaders were vocally anti-slavery and pro-Africa, and they secretly helped slaves escape to the north. The Delaware County Historical Society now offers a printable guide for a driving tour of the homes known to have been part of the Underground Railroad.

The county has grown steadily at a modest pace. Businesses spilled into the area over time, bringing many opportunities into the area. The county became one of the fastest growing in the nation in the 1990s following a business boom. Farming is a large part of Delaware County life. There are many community farmers and farmer’s markets that populate the area. The residents have also made sure to preserve the historic look and feel of the downtown area. They did well protecting their buildings and also attracted many consumers.

Lewis Center by the Numbers

Learn About Lewis Center’s Economy, Demographics, and What It’s Really Like to Live Here

Around 75% of Greenville’s residents are white. There are 31% of them who are of German descent, 15% are of Irish descent, and 10% are English. About 5% of the population is black, and 13% of the population is Asian. About 3.7% of residents claim Hispanic ethnicity and 3% identify as two or more races. The average price for a home in Lewis Center is about $300,000.

Lewis Center is known for having really great schools. Lewis Center kids go to school within Olentangy Local School District, which serves students from multiple nearby municipalities. The district runs four elementary schools, five middle schools, and four high schools. The district is the fifth largest in Ohio, with an enrollment of over 22,000.

Things to do in Lewis Center

Lewis Center has a lot to offer to people who love the outdoors. There is so much amazing outdoor space to take advantage of, you will love exploring it! You can tour through caverns or take scenic hikes through Lewis Center’s many hiking spaces. There are also a few fun things to do indoors. There is plenty of shopping and great food to be had in this town. You will have a great and comfortable time while out and about in Lewis Center.

Where People Shop, Dine, and Hang Out in Lewis Center

People in Lewis Center live there to enjoy a slower paced life. Residents of Lewis Center love to enjoy nature in relative peace. There are many different shopping centers nearby for locals to enjoy, along with some great small shops that sell vintage items. There is also some great food in the area. The food options are not limited either, you can can many different kinds. And if you need even more options, you can travel into one of the many cities close by Lewis Center.

This pub was made for casual fun.

The Keystone Pub & Patio is all about making sure that guests have a good time. The décor makes it clear that this is a casual establishment. There are table legs that look like barrels, light fixtures with beer logos, and over 30 flat screen TVs. This is the place to bring a large group of friends for a rowdy night out. If you’re a sports lover, you can easily watch any game you’d like on one of their many screens. There is an extensive food and drink menu. They serve quesadillas, wings, pizza, burgers, and much more! The drink menu is even longer. You will have more than enough beer, wine, and cocktail options to choose from.

There are some great games you can participate in at this pub. You can play pool, pop-a-shot, and skeeball. You can even play the lottery there! They even show live music from time to time. There are two large outdoor patios and outdoor games, so the fun isn’t just limited to the indoors.

“This is our favorite go-to dinner! We love having a neighborhood restaurant to frequent. Our server Matt is outstanding. Stop by. You won't be disappointed.” -- Yelp Review

The Porch is a Venezuelan restaurant, which isn’t something you see very often. This place offers the chance to experience a unique cuisine right in the heart of Ohio. They use the best local ingredients they can find to serve up renewed ideas about Venezuelan food. They aim to celebrate the way Natives, Europeans, and Spainards melded their food traditions together in the past to create the food that Venezuelans eat today.  You can get appetizers like empanadas, and fried plantains covered in Venezuelan cheese. They also have arepas, which is a traditional baked cornmeal cake that is made with different fillings like cheese and shredded beef, shrimp and pico de gallo, barbeque pulled pork, and many more. Another great offering is their patacones, a sandwich made with fried plantains instead of bread.

Inside, the place looks like a cozy cabin in the woods. It is a beyond casual atmosphere that will make you feel at ease. The staff is very kind and patient with answering questions since many people are unfamiliar with their cuisine.

“We had an amazing meal at The Porch!!  We started off with Taquenos followed by an arepa and the patacon.  They were so fresh and delicious, and such generous portions.  The service was top notch - answered all our questions since it was our first time.  This place is a GEM that we just stumbled upon driving through Powell. Totally worth the trip wherever you are coming from.” -- Yelp Review

This place is meant for roaming.

Metro Parks has a mission to conserve open spaces. They want to make sure that people have plenty of opportunities to experience nature. They operate multiple public parks. You can go to one of their parks for a long hike, to play on the playground with your kids, or have a pleasant picnic. There are many well maintained paths and an awesome river you can enjoy. They even have multiple designated picnic areas and grills so you can cook up some food while you’re there!

There is lots of parking all along the park, so you will have many options. There are different rules for different trails, some allow pets and some do not. This is an excellent place to have a good time with your family!

“So many trails! Beautiful park with tons of things to do and see.  There are outdoor exercise stops. Paved and gravel trails. River access.  Come and get lost.  Burn some calories or cook out and put them back in!”” -- Yelp Review

This place is full of adventure.

This place is made for family friendly outdoor adventures. You get to wander through a cave on a self-guided cave tour that lasts around 30 minutes. You get to listen to audio and read plaques that give information on the location. And when you’re not walking through the cavern, you can check out some petting zoo animals! There are pigs, goats, deer, and more. You can feed and pet them, and overall have a good time with some amazing animals.

There is a simple walking trail through the woods if you would like to hike a little bit. There also happens to be a playground. This place strives to show kids a great time. There is miniature golf, a treasure hunt maze, and cave yoga. They even offer a cave summer camp for kids.

“Our kids had a great time! A variety of things to do. Maze was actually kind of challenging. The cave is small but cool, a great cave to get your kids interested in that kind of thing. Tour was only 25 minutes so not too long but just long enough. Petting Zoo had deer which I've never seen before. Not too expensive.” -- Yelp Review

Lewis Center, Ohio is a quiet community that is great for people who prioritize peace. There is a lot to do out in nature, and you can have some great indoor fun as well. If frequent hikes followed by picnics in a lush, green environment sounds great to you, Lewis Center might just be the right place for you!

Plan Your Next Weekend Getaway in Lewis Center, Ohio

Plan Your Next Weekend Getaway in Lewis Center, Ohio