Moving to Reynoldsburg, Ohio? Here’s What You Need to Know!

The “Birthplace of the Tomato” is a fruitful place to plant your family! 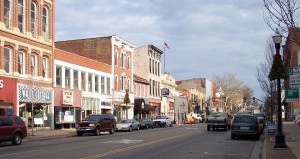 Homes for sale in
Reynoldsburg

The mayor may change, but the history of the town never will.  Image courtesy of Geographically Yours Welcome.

Reynoldsburg, Ohio is known as “The Birthplace of the Tomato,” as the first commercial variety of tomato was bred and sold there in the 19th Century.  We’ll give you more information on the Tomato Festival later in the article.

The city was originally named “Frenchtown” after John French, the man who originally planned the city.  Its present name is after the local merchant, John C. Reynolds-- it was changed in 1893.  The post office was established in 1833.

It”s one of the larger  Columbus suburbs, standing at 11.24 square miles with Blacklick Creek running through it.

The gentleman responsible for Reynoldsburg’s fruity nickname is Alexander W. Livingston.  Mr. Livingston was determined to breed the wild tomato varieties into plants that would produce fruits that were more uniform in shape and color.  He saved the seeds of all the tomato plants that produced fruits of ideal shapes and sizes and next season, planted them in rows in a separate garden.  In this way-- through cross-pollination from wind, insects, and birds-- he was rewarded with much more uniform tomato fruits.  Using this method, he introduced “the Paragon”-- the first commercial hybrid tomato-- and “the Acme,” which became the parent variety for most of his subsequent crops.

He began the Livingston Seed Company, and employed most of the residents in the town.  He would host picnics on his property for the company workers after seed harvests and sorting.  After his death, his home was recognized by the National Registry as a Historical Landmark due both Mr. Livingston’s reputation and for its 1800 frame Victorian construction.  The house is available for rent-- preferably for adults only-- and is ideal for weddings, parties and bridal or baby showers.

The majority of Reynoldsburg residents feel very safe and express praise for the visibility of police.  Image courtesy of Pinterest.

Reynoldsburg is governed by a City Council, comprised of 3 At-Large representatives, 4 Ward members, and a public-elected Council President.  A current list of City Council members is listed on the City of Reynoldsburg website.  Terms are served for four years.  Their first January meeting is organizational only, with subsequent meetings on the 2nd and 4th Mondays of each month geared more regular city concerns.  The council’s four standing committees are: finance, service, safety, and community development.  It is within the Council President’s power to appoint a special committee for a limited purpose, subject to majority council approval.  The council does not meet during August, and all meetings are open to the public.

The City of Reynoldsburg has thoughtfully posted their City Code/Codified Ordinances online.  This document contains loads of useful information about what is legal and illegal in the city.  They have also posted all City Council Meeting Minutes.

Reynoldsburg City Income Taxes are collected by RITA-- the Regional Income Tax Agency-- and all individuals over 18 years old who worked even part of a  year in the city are required to file, even if only to file an exemption.  The local income tax is a little higher than some other Columbus suburbs-- 2.5%, as compared to the previous (and more common) 1.5% we’ve seen in other places.  However, it’s important to note that unlike many other Columbus suburbs, Reynoldsburg is a city-- not a tiny village, town, or census designated place.  Business must also pay the 2.5% city income tax.

Reynoldsburg also has a City Attorney, a City Auditor, and a publicly-elected Mayor.  The Mayor operates in a slightly different role than mayors in some other, smaller suburbs-- here, the Mayor is not a member of the City Council.  In Reynoldsburg, the Mayor is more focused on Administration: Public Safety, Public Services, the Clerk of Courts, Parks and Recreation, the Computer Department, Development, the City Engineer and Human Resources are all under the purview of the Mayor.

The Police Department of the City of Reynoldsville employs 70 officers, 8 dispatchers, and several civilian employees.  They also have a Reserve Unit of 18 sworn offices who volunteer approximately 4,800 hours annually to help the Police Department during community events and special functions.

So how safe are you in Reynoldsburg?  Well, remember that this is a city in its own right-- there are 37,000+ people who live here.  Niche.com gave Reynoldsburg a C in Crime & Safety-- the Assault, Robbery, Theft, Auto Theft, and Burglary statistics were all decently lower than the National Average.  Murder and Rape were a little bit higher.  A poll of residents found that 53% felt that there was “some crime, but it doesn’t impact me much” and 32% felt “very safe” with “no real crime to speak of.”  16% said that they generally felt safe but at times did not, and they were well aware of the crimes.  City-Data.com found that there were 47 registered sex offenders living in Reynoldsburg, which was lower than the state average.  When City-Data.com mapped out the crime statistics, it was apparent that the crime rates are steadily dropping.  Niche.com polls revealed that 61% of residents felt that the police were “visible and very responsive” and 22% felt that they were visible but a bit slower than they’d like.  The rest either weren’t sure or felt that the police weren’t visible but definitely there when needed.

School pride is encouraged, but so is respect in Reynoldsburg public schools.  Image courtesy of Reynoldsburg Public Schools Twitter.

Let’s take a look at the average Reynoldsburg resident.  As we stated before, over 37,000 folks have chosen to call Reynoldsburg home.  According to Niche.com, the Demographics for the city are an A-- the city is more diverse than most of the surrounding suburbs, although still fairly equally split between those who identify as male and female.  62% of residents are white, 25% are African American, 5% are Hispanic, 3% are Asian and 5% are of mixed heritage.  Virtually no other races are currently accounted for in the area.  Most residents have graduated high school and gone on to higher education-- those statistics are generally on par with the National Average.  There’s a wide mix of age groups that are fairly equal, too.

Nextdoor-- which helps neighbors connect and become a community-- lists the top three reasons people love Reynoldsburg as: convenience, walkability, and the schools.  The top ten interests polled were: walking, gardening & landscape, home improvement & diy, books, swimming, BBQ & grilling, crafts & sewing, dancing, parenting school-age kids, and running.  Polls on Niche.com indicate that the majority of residents feel that there is a good sense of community and the LGTBQ+ community is accepted and welcome here.  Many of the other, smaller suburbs do not have enough data to make such a statement or lean rather conservative.  Reynoldsburg is in an area that tends to vote Democratic.

61% of residents own their own home, while the 39% who rent tend to pay around $977/month for a two-bedroom apartment.  Studio apartments go for around $660/month and one-bedrooms for $780/month.

Reynoldsburg has several public schools, from preschool to high school.  Students are expected to live by the Reynoldsburg Compact on Respect, which emphasises a connection between knowing yourself and participating in the community in a manner that respects all.  Their Academics are highly personalized, allowing students and parents to choose from among several specialized instruction models.  STEM is integrated at all grade levels, as is blended learning.  High school students are provided with access to college classes and professional experiences beyond the typical classroom.  They offer Gifted Services, music and performing arts programs, special education, and Latch-key Programs as well as an ELL program for students whose first language is not English.

Tomato Wars during the Tomato Festival can get really messy, but proceeds go towards feeding the hungry!  Image courtesy of WBNS-10TV Columbus, Ohio.

Many residents of Reynoldsburg are young professionals or families.  And with the city’s dense suburban feel, there’s some great things to do as a single person or as a family unit.

Remember at the beginning of the article when we said we’d tell you more about the Tomato Festival?  Well, that time is now!  The Reynoldsburg Tomato Festival has to be one of the more unique things to do for fun around here.  The festival was first conceptualized in 1965, when the Livingston House was dedicated.  A year later, the festival came to fruition (pun fully intended).  The original festival included a tomato fight between Democrats and Republicans, a dog show, art shows for both kids and adults, and a queen’s pageant and parade.  Current activities and events include a salsa challenge, a tomato contest where the winner walks away with $20/lb for the largest tomato, tomato wars with no loser (goggles provided), a chili cook-off and more.  The Pageant tradition is still very much alive, and all ages are welcome.  Live entertainment is provided and changes from year to year.  Vendors sell crafts as well as food and beverages, rules and regulations keep everyone safe and it’s a great time to rack up some interesting volunteer hours to add to your resume!  Bring the whole family-- it’s a delicious way to spend the day!

If you’d really like to try something different, try the local Urban Air Trampoline & Adventure Park located on East Livingston Avenue.  Urban Air is a chain of kid- and family-friendly indoor park facilities that feature trampolines (of course), ropes courses, virtual reality, climbing walls, and a slew of obstacle and arial courses guaranteed to give every member of the family the most fun physical workout ever!  The kiddos-- and you-- will sleep VERY well after a day spent here!

Pictures might be in color and digital now instead of black & white and on paper, but one thing hasn’t changed in Reynoldsburg-- the respect and sense of community.  Image courtesy of Ohio Memory-- Ohio History Connection.

You won’t regret moving to Reynoldsburg, Ohio.  The city is full of people who just want to be good neighbors, schools that build respect as well as education, and plenty of safe spaces to play and connect with friends and family.  Put this little city on your short-list, and contact a Realtor today!

10 of the Best Golf Courses in Ohio

Moving to Reynoldsburg, Ohio? Here’s What You Need to Know!