A Guide to College Football in Ohio

Which team are you cheering for? 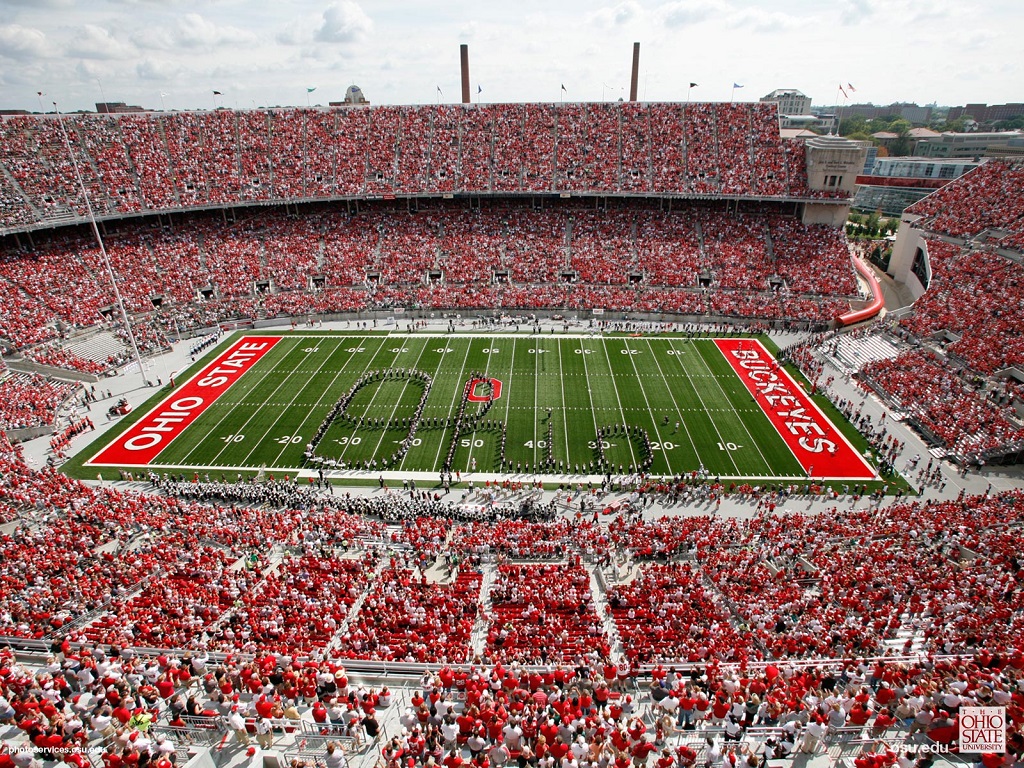 Whether it’s tailgating or cheering on your team, nothing beats the excitement and camaraderie of a college football game. Luckily, Ohio is a state filled with lots of school spirit and plenty of football. No matter where you are, chances are there’s a team near you. So here’s the basics on the college football scene in Ohio—just in time for football season.

Football fan or not, Ohio is a great place to live! Check out the largest selection of high quality real estate in Ohio brought to you by HER, REALTORS®.

About: The Ohio State University football team may be the most iconic of the state. As part of the Big Ten, each year OSU is up against other football giants like Indiana University and Pennsylvania State University, to name a few. Last year the team ended the 2017 season with 12 wins and 2 losses, earning them a spot at the Cotton Bowl in December. The team plays and practices at Ohio Stadium on the university’s campus northwest of Columbus. This year the Buckeyes are looking forward to a packed schedule with games against Oregon State University, Purdue University, and finally their rival University of Michigan for their last home game or “The Game.”

Tickets: As a very competitive team, it can be hard (and expensive) to get tickets to OSU home games. At most games a seat will cost you 100+ dollars and season tickets are at least 1,000 dollars, so choose wisely and buy your tickets now!

About: Another great Division 1 team in Ohio, the Ohio University Bobcats are part of the Mid-American Conference, putting them up against teams such as Western Michigan University and Northern Illinois University, as well as fellow Ohio schools Miami University, Bowling Green State University, and Kent State University. Located in Athens, OH just southeast of Columbus, the team plays in Peden Stadium on the banks of the Hocking River. Finishing the 2017 season with nine wins and four losses, the Bobcats are looking forward to another great year. Starting with games against Howard University, University of Virginia, and their neighbors to the west the University of Cincinnati, the 2018-2019 season is sure to be exciting.

Tickets: As a smaller school, tickets are a little easier to come by. Season tickets for the next season are currently running at about 125 dollars. You can also buy single game tickets, but get your tickets quick before they’re all sold out!

About: Located in Oxford, OH just north of Cincinnati, the Miami University Bobcats play in Yager Stadium. As another D-1 team and member of the Mid-American Conference, the team definitely has a lot of within state rivals, particularly Ohio University. This year the teams are playing each other on November 7th in what’s known as the “Battle of the Bricks”—a reference to the iconic red brick displayed on both campuses. The rivalry goes all the way back to when the two football teams first played each other in 1908 and now has spread to all the schools’ sports teams that go against each other from the two schools. Although this is definitely the game to be at, be sure to check out the rest of their schedule for the Fall 2018 season!

Tickets: If you buy in advance, you can get a single game ticket for as little as 15 dollars and season tickets for as low as 105!

About: Located in Cleveland, OH, the Case Western Reserve University Spartans are definitely a great team to watch, if you’re in the Cleveland area. Although the team is Division III, they have a stellar record—the team was undefeated during last year’s until the NCAA playoffs when they lost to the Mount Union Purple Raiders. This season promises to be just as exciting with games against University of Rochester and their rival Carnegie Mellon University.

Tickets: You can get your tickets at the gate before each game for the great price of only five dollars!

The University of Akron Zips

About: Another Ohio school that’s part of the Mid-American Conference, the University of Akron Zips play at the relatively new InfoCision Stadium—Summa Field on the university’s campus in Akron, OH. Now known as the Zips, the team was originally called the Akron Zippers after a rubber boot company that used to be headquartered in Akron. The team will be starting the 2018-2019 season with games against University of Nebraska, Morgan State University, and Northwestern University.

Tickets: Get season tickets for as low as 60 dollars or pick out the game you’re most excited for at the great price of only 15 dollars!

About: The University of Cincinnati Bearcats are another great team to root for, especially if you’re in the Cincinnati area. Located in the heart of Cincinnati, the team’s own Nippert Stadium is just a hop, skip, and a jump from the city. Although the team is a member of the American Athletic Conference, their biggest rival, Miami University, is actually not in their conference. Each year the teams play each other in what’s called “The Battle for the Victory Bell.” In a tradition dating back to 1888, the winner of the game is awarded the Victory Bell, a trophy version of a bell that once hung in Miami’s Harrison Hall. Tune in September 8th to see who will be the next winner!

About: The University of Toledo Rockets are another Ohio member of the Mid-American Conference. The Rockets had a winning streak last season with 10 wins and 2 losses, earning them a spot in the Mid-American Conference Championship Game—which they won! The team then went on to The Dollar General Bowl against Appalachian State. This year the team will be playing their in-state rival, Bowling Green State, on October 6th!

Tickets: Get your season tickets for a little over 200 dollars and individual game tickets anywhere from 33-63 dollars.

Tickets: Purchase your season and individual game tickets online for 100 and 20 dollars respectively!

About: Yet another member of the Mid-American Conference, the Bowling Green State University Falcons are a great option for football fans in northern Ohio. They had a bit of a rough season last year, only winning two games within their conference and overall, but fans are sure that they’ll bounce back in the coming months. The game all Falcons fans are looking forward to is happening on October 6th when Bowling Green plays their neighbor to the north, University of Toledo. If you do find yourself at a game, be sure that you know the school’s unofficial fight song “Ay Ziggy Zoomba” so you can sing along.

Tickets: Get your tickets, for the whole season and individual games, so you can become a Falcon fan too!

About: The University of Dayton Flyers are a Division II team and also a member of the Pioneer Football League, which means they play teams like Marist College, Butler University, University of San Diego, Drake University, etc. Don’t let the team’s division deter you from attending games—the flyers have a loyal fan base. So if you’re anywhere in between Columbus and Cincinnati, head over to Welcome Stadium for a game!

About: The Kent State University Flashes  is our last Ohio member of the Mid-American Conference. The team’s biggest rival is at the University of Akron only ten miles away! The two teams will be going head to head on October 20th, so be sure to tune in or buy your ticket for the much-anticipated game! Besides Akron, Kent State University will be playing some other big teams next season, such as Penn State and Ole Miss. So if you’re anywhere around the university, which is a little northeast of Akron, consider going to a game this season!

Tickets: Get your season tickets starting at 45 dollars today or pick which game you want to go to and buy an individual ticket online!

Keep in mind that this list is not the end all be all of college sports in Ohio. There are plenty of other local colleges and teams, and there’s bound to be a sporting opportunity near you. And besides football, there are so many other reasons to live in the great Buckeye State. Even if you’re not a football fan now, chances are you may get sucked into the hype once you’re there. So whether you’re yelling at the TV in the comfort of your living room or cheering in the stands with the rest of the fans, we hope you find the team for you.