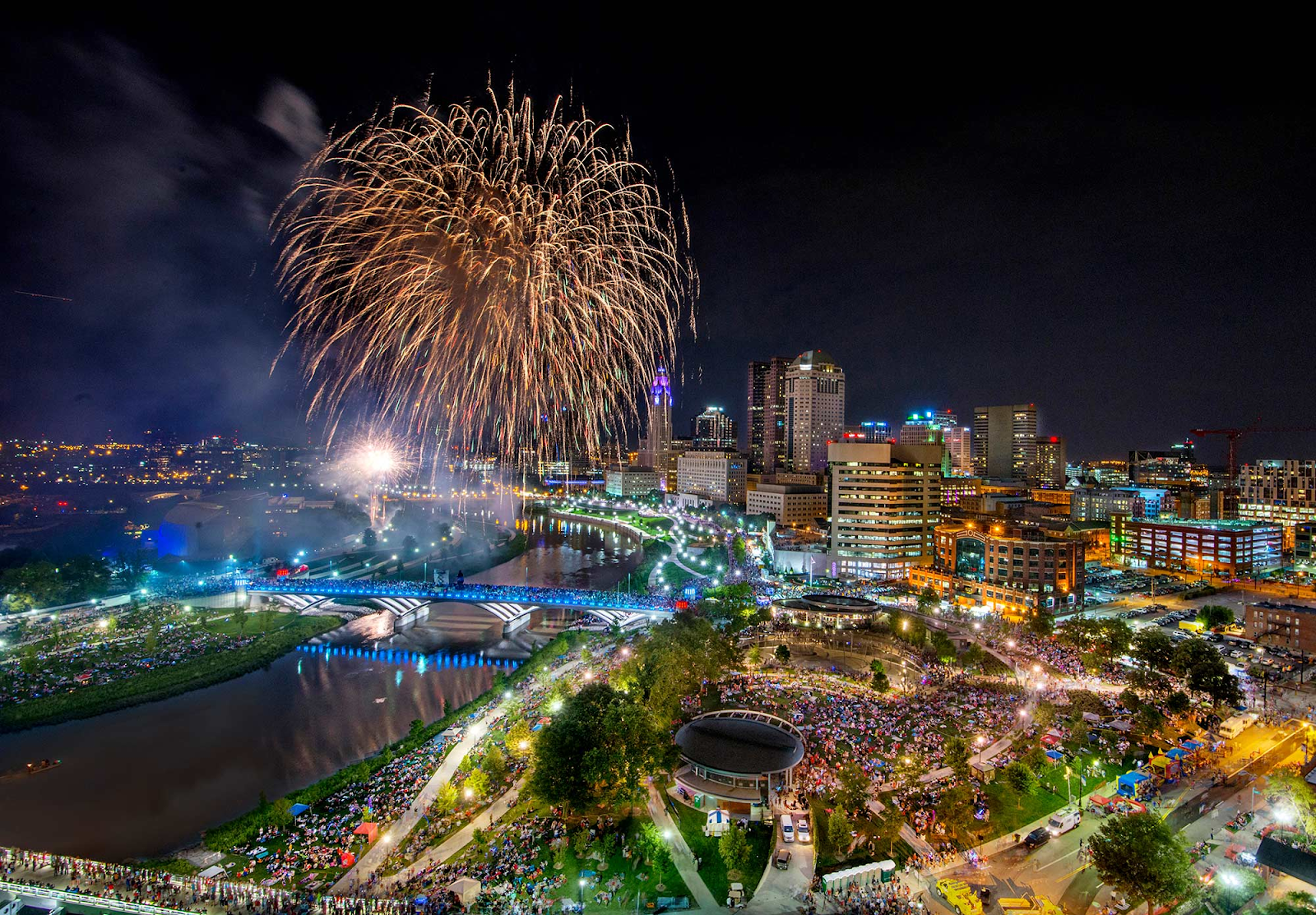 It is probably safe to say that COVID-19 has uprooted many lives all around the world. With millions of people left jobless and schools around the world closing, quarantine and social distancing has become the world’s new norm. These new state-dependent laws in regards to  staying ‘6-feet apart’ and wearing masks in public have made celebrations such as birthdays and holidays near impossible. With the 4th of July coming up in a few weeks, many may wonder how celebrations will commence under the new social distancing rules. These rules make it a little more possible for normal daily activities to commence in a few weeks.  Don’t stress! Columbus has thought of some creative ways to both keep everyone safe as well as have some fun this Independence Day.

Here are five creative ways Columbus will be celebrating The 4th of July:

Red, White, & Boom is known to Columbus natives as the largest firework display in Ohio. Not only are these fireworks the best in Ohio, but they are also the largest firework display in the midwest. Traditionally every year, 450,000 spectators gather to watch the firework show and take part in what is known as the region’s largest party. This year marks the 40th anniversary of Red, White, & Boom and was expected to be the most spectacular display yet. Due to COVID-19, this non-profit organization supported by NBC4 has announced that the commemoration of patriotism will continue, just in a different fashion.

Ken Freedman, VP and General Manager of NBC4, announced the new plans for the display to the student voice of Ohio State, The Lantern. He is quoted saying:

“However, as we have all changed our lives in the era of Covid-19, so too has RW&B! has adapted to a new reality. Instead of a huge party on the Scioto Mile, NBC4 and our partners plan a multi-day TV, digital and social media event.”

This multi-day event is a 4-night television campaign that will air live on NBC4 starting Wednesday, July 1st until Saturday, July 4th. Each night will feature different themes for stories of Ohio’s annual 4th of July celebration. The first type of stories to be featured will be taking a look at local veterans who were inducted into the Ford Oval of Honor. For anyone who is unfamiliar with the Ford Oval of Honor, it is a program that honors 10 central Ohio veterans every year who have shown an unparalleled commitment to serving the country.  Also, throughout the 4-nights, a compilation of the best fireworks displayed over the years will be shown as a way to commemorate the show’s amazing history. 39 years of archived video footage will be shown and you won’t want to miss it!

In the midst of the Coronavirus Pandemic, the board of directors for Red, White, & Boom are still working on identifying possible on-site activations where fireworks could be set off and Ohioans could watch. The possibility of on-site activations is hope for everyone to come together safely while adhering to local, state, and federal laws with regards to social distancing. This 4-day televised event will not only showcase the greatest firework display ever seen in Ohio, but will also provide an opportunity for residents to come together in a unique way to celebrate our independence, our veterans and current service members, and our rich history.

You won’t want to miss this historic event! If you’re looking for something more than a regular firework display, be sure to check out Red, White & Boom!

Drive-in movie theaters have been revived since the Coronavirus social distancing policies have deemed them safe places to go for movies. Drive-in theaters were considered a dying piece of American history before the pandemic outbreak. They have since become a haven for moviegoers of all ages who are looking to get out of the house for the night.

Located in the Southside of Columbus, the South Drive-In Theatre is the city’s favorite movie outlet! This theater provides a unique and fun movie experience for all ages. This theater has concessions along with a strict list of regulations that all patrons are required to follow. The COVID-19 operating procedures include but is not limited to the following:

Customers who do not follow these rules will be asked to leave and will not be given a refund.

Movies alternate each day and will run Fridays through Sundays. Movie listings are unavailable for July 4th due to primary June listings being the only ones made viewable for moviegoers at this time. A drive-in movie might be the perfect option for Saturday, July 4th. The South Drive-In Theatre will provide a retro experience as well as a safe environment for anyone who is tired of being stuck in the house.

Postponement of a 37-Year-Old Tradition

You may be asking ‘what the heck is the Doo Dah Parade?’. The answer to that question is simple. It is a satirical, fun, unique parade that anyone can be a part of. The parade does not require registration. Anyone can be part of this long-standing tradition. The parade route is the following:

Costumes are highly recommended in making the day more fun. Parade-goers are encouraged to exercise your first amendment rights with humor. After the parade, there is a block party in Goodale Park at the gazebo. You can enjoy beer, live music, food, and more. Come out and support local restaurants and merchants!

Unfortunately, due to the Coronavirus, this year’s Doo Dah Parade and block party have been postponed until Saturday, September 19th. All the same fun 4th of July activities, just at a safer date. The official Doo Dah Parade site is quoted saying that the:

“Post Apocalypse Doo Dah Parade will be a celebration of Liberty & Lunacy and will be the biggest dang-nab-it St Paddy's Easter De Mayo Memorial Bash of July ever!”

Need a fun way to cool off this summer! Come to Central Ohio’s Wildest Waterpark. The attraction stays open until 11 pm and features music, animals, a wave pool, and Dive-In movies. To enjoy a dive-in movie all you need is a pool tube. You can relax in the pool tube while sitting in the wave pool and enjoy the featured movie. Admission to the park starts at $23.99 and can be purchased online. This admission also includes access to the Columbus Zoo for the day. Based on current CDC guidelines, the opening day which was May 16  has been postponed. The park is now open weekends from June 28th until August 2nd. Independence Day weekend has been designed by Zoombezi specifically for family activities and is an enjoyable experience for everyone!

The Columbus Zoo aspect of Zoombezi family nights has many attractions that are fun for all families. You can enjoy the day at the zoo and interact with many different species and check-in for live feedings. These live feedings feature the Discovery Reef Aquarium as well as the beloved Bonobo monkeys in the Congo expedition region.

Muirfield Village Golf Club was designed by Jack Nicklaus himself. The land for the golf club was acquired in 1966, but the golf course itself was not built until 1972. The golf course is 220 acres including an 11 acre driving range. The course was officially dedicated on Memorial Day in 1974 but has been adapted to fit Independence Day.

A statement was released on April 16, 2020, regarding reschedulement due to COVID-19.  Jack Nicklaus is quoted saying the following:

“This is an unprecedented time in our world, as well as the world of sports. I can’t emphasize enough the message related to doing your part by social distancing and helping our nation and world by slowing this pandemic. But while we all need to come together and be strong, we also need to be understanding and flexible. When the PGA TOUR was looking at how and when to revamp the golf calendar, the Memorial Tournament was quick to raise its hand and step up, and offer support for a new date.”

The tournament will now be contested the week of July 13th through the 19th and will feature an increased field from 120 players to 144 players. The tournament will continue to sell patron badges weekly starting at $185 with a complimentary $20 merchandise card. Postponement of your July 4th celebrations is a pain but, it keeps everyone safe and healthy! This tournament is great for golf enthusiasts!

Columbus is home to many fun activities that are all based around social distancing. The Coronavirus has changed all of our lives and we’ve done an amazing job adapting to the new policies and rules. These rules are set in place in order to make sure everyone is protected. With many places being shut down due to the quarantine, many 4th of July activities have had to be postponed. This article has given an overview of creative ways in which Columbus, Ohio is planning on celebrating Independence Day. There are still the traditional firework shows but just in a different format. Online shows and postponements are the best case scenarios in protecting everyone. We will get through this together and come out the other side stronger than before the pandemic. If you’re looking for more ways to enjoy this 4th of July, check out some of these ways to celebrate our independence.